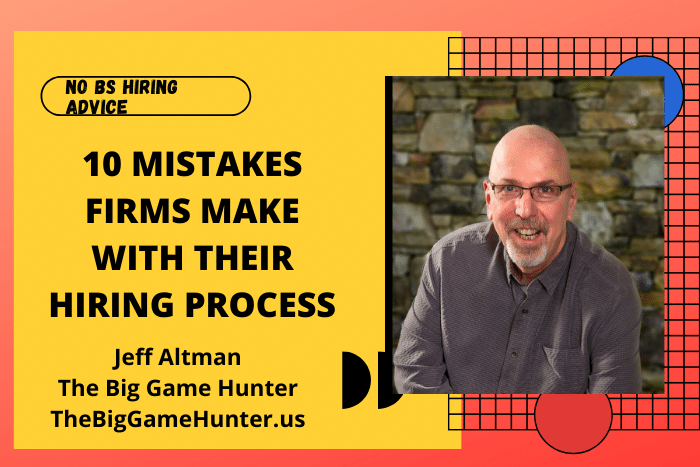 Someone messaged me recently if I had written anything about the recruiting process and hiring. After about 30 seconds of thinking and a search through my YouTube videos, articles, and No B. S. Hiring Advice podcasts, I saw that almost everything I write about touches on the subject but few articles are explicit.

As such, I thought I would address ten mistakes firms make in their recruitment process.

1. The job description reads like a buffet menu and doesn’t reflect reality

If you’ve read any job description whether posted by a company trying to hire or a recruiter trying to fill a position with that same company, you see a description that lists 27 “requirements” and 52 responsibilities. In point of fact, most jobs can be distilled down to a few core skills and responsibilities. As a result, resources are wasted looking for a “purple squirrel” that rarely exists and, if it does, the expense of finding them in interviewing time for HR, hiring managers, and staff far exceeds the benefit of finding “the perfect person.”

2. The hiring team doesn’t get clear about everyone is there to evaluate.

The good news is that hiring managers enroll their staff with hiring. The bad news is that the staff is not given clear instructions about what to evaluate for and how. As a result, too many talented people are rejected because a VP is asked questions about work they will never be asked to do but the staff person thinks is important for them to know because that is what they do. I have listened to so many VP’s walk out of interviews shake their heads saying, they asked me deep technical questions about things I haven’t done in 10 years and will supervise others doing here. They were rejected because the staff person judged them as being too light. Really?

3. Hiring managers don’t get clear about how they are going to evaluate people.

Masked in asking stupid questions like, “tell me about yourself,” is the reality that too many hiring managers are clueless about interviewing, have yet to develop standardized questions to assess people, and then leave the interview with doubts that are their own doing. A ten-question checklist of questions should cover the basics of evaluating a potential hire and then you can explore details based upon answers to these questions. In addition, by standardizing questions you can avoid one of the potential areas where bias can rear its’ ugly head.

4. Managers think they are qualified to hire for fit

People like to hire people just like them. Unfortunately, if allowed to propagate within an organization, that attitude leads to departments of mediocre clones instead of exceptional talent. As I have challenged numerous times, what qualifications do you as a hiring manager have to assess for fit? Are you administering behavioral or industrial psychology tests and then comparing them to the results of your existing staff? No. You’re trying to hire someone just like Susan, James, Hung, Ramsey or someone else in your department . . . except they aren’t just like them. They are acting as a job applicant does on an interview and you have no idea what they will be like when you hire them. That’s why in a recent survey, more than 70% of recent hires would not be rehired by their boss (Think about that folks. Three out of four of you are thought of as a mishire).

I first heard this term 15 years ago to describe how entrepreneurs chase their tail from one great idea to another and fail to complete things. “Oooh. This is a great idea,” as they start working on it and then another idea pops into their minds . . . and another and another.

Hiring managers have their own version of bright shiny object syndrome. Like a mother looking at a potential bride or husband for their son or daughter, no one is ever good enough. As a result, the first candidate who walks in with the first 11 of those 27 “requirements,” the ones that will be used daily or regularly is kept “on hold to see if someone with 23 of the “requirements” that will be used on a 90-degree day in Alaska in January (do you think there are ever 90 degree days in Alaska in January) and then risk losing the first candidate to another firm, turning them off and/or wasting a hold bunch of time and money interviewing more.

Think about it. The risk and expense is rarely worth the reward; why do you do it? Because the next object MAY be shiny!

6. You keep recruiters at arm’s length and don’t teach them what you look for and how you measure for it.

7. You give people “a pass” because they were referred by someone you know

Social proof sometimes works when a friend recommends something or someone to you on Facebook yet hiring managers cut corners when they interview someone who was referred to them. Why? Put them through the same rigorous process to see if they can cut it.

I have a Master’s in Social Work, did psychoanalytic training for several years, facilitated thousands of psychodrama processes, run groups, and practiced as a therapist. This is what we call in the business, “projection.” You are projecting attributes onto someone based upon a fantasy of what they are like.

9. The reference checks you conduct are as thin as a model during Fashion Week in New York.

How many times have your references flushed out anything critical about someone? Are you telling me there is nothing wrong with this person? Remember 3 out of 4 hiring managers wouldn’t rehire someone and you think you got their one good person.

10: You treat your corporate recruiting people like they are incompetent when they don’t instantly deliver what you want.

Many hiring managers are clueless about the impact of their ridiculous demands and then throw tantrums when their firm’s recruiting staff can’t satisfy them.

“You have LinkedIn,” they pontificate. You’re lazy if you can’t get me someone!”

Let me let you in on a secret. LinkedIn is just another database of people and if you think your recruiters, both corporate and 3rd party can instantly find 22 people for you to interview, delay hiring because you want to see more, and then deliver to you, you are 100% wrong.

Most hiring managers are their own worst enemies to filling jobs, not corporate recruiting.

These folks are attempting to service more than 1 person and are interviewing a lot of frogs to get to one prince or princess for you to procrastinate hiring. Plus, they are interviewing for multiple positions in your organization

Recruiters, both agency and corporate do not invent potential employees; they reflect markets. Finding purple squirrels takes a lot of time. If you have that much time, maybe you don’t need the position filled and can stop wasting everyone’s time. 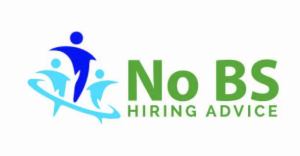