The title of this, if you're looking at this, kudos to you. You're willing to explore something that may be making you a little bit uncomfortable, managing by confrontation, because managing is one of those skills, one of those skills that can be acquired, that by nature involves a degree of control. Confrontation these days . . . wooooooo. That's something that business finds very uncomfortable. It implies arguing; it involves . . . well, it implies direct blunt communication, that may make people uncomfortable.

Now, I want to be clear, that confrontation doesn't have to be loud, and shouldn't be loud. I want to be clear that managing doesn't mean that everything is done the same way as it's always been done because the old way, doesn't always work, right? Circumstances change, businesses change, economic times change.

Your job as a manager, your job as a leader is to be aware of changes and make sure you're steering the ship in the right direction. After all, winds come up when you're on a vessel, right? You may have to turn the sails in a particular way to catch the wind, or to turn them in a different way to steer the vessel in a different way to avoid them. Right? We can avoid situations, but it's really like the ostrich putting their head in the ground. Confrontation isn't bad. Let me give me an example of a confrontation.

"Now I'm new in this group," Or "Yeah, I've been here for a couple of years. I've been watching. I'm curious. Why does it get done that way? What are your opinions?"

"Because that's what I was told."

"They didn't tell you why?"

Another great setup is the word, "Why."

"We've always done it that way."

"Because my boss said that."

"Out of curiosity, why do you think they did that?"

"Why do you think they said that," is designed to cause an interruption in the pattern of behavior that makes people think. Is this really the best way or is this a habit I've gotten into, that I'm perpetuating, because I haven't thought about it for a while.

You want your people thinking, right? You want some energy on the line? You don't want them to just be human robots, do you? You want people who love what they do and that involves ownership, right? If they don't own the task, that they're doing it, because they've been doing it this way for 100 years, and the people who sat in that chair before them did it that way for 100 years, you're not getting the best from them. Their eyes are glazed over all day long . . . If you're lucky.

So, I want to encourage you start looking around and see if there are places where you can ask questions and confront whether this is the best way to do something and with that, when you get a request of you, make sure you ask the question, "I'm curious, why are we going to be doing it this way? Because I want to make sure I can explain it to my people. So their minds are engaged. So their effort is engaged. And they're not just doing it like they're on a factory, and they are the machines."

So I hope you found this helpful. I'm Jeff Altman. I've got a lot more at TheBigGameHunter.us. Go over to the site. Go exploring. There are thousands of posts about job search, hiring, management, being more effective in the workplace. And if you're interested in my coaching you because you've got some complicated stuff at your office and you want to work with someone over the course of time to help you move forward faster, reach out to me through TheBigGameHunter.us. There's a place on the site where you can ask for a free discovery call.

Hope you have a great day and take care

Jeff Altman, The Big Game Hunter is a coach who worked in recruiting for what seems like one hundred years. He is the head coach 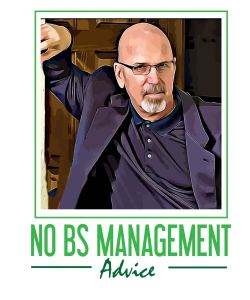 for NoBSCoachingAdvice.com. He is the host of “The No BS Coaching Advice Podcast,” and “No BS Job Search Advice.”