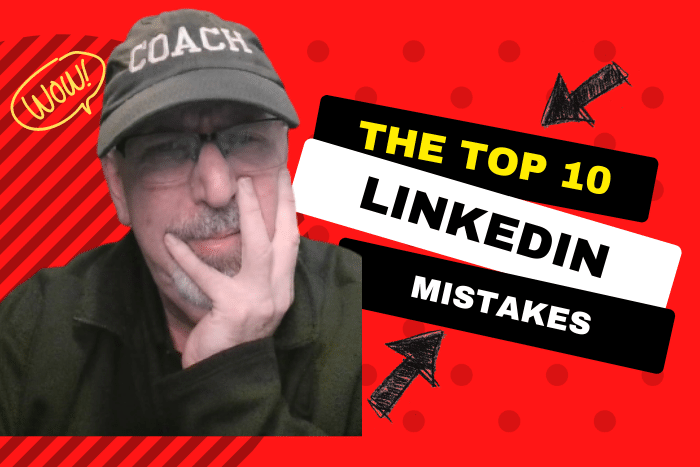 I am LinkedIn member 7653 of the more than 750 million people on LinkedIn, I was the 7,653rd member. I skip some of the very common mistakes and go to a few more significant ones.

You may also like “Career Branding Mistakes: Presenting Yourself as Ordinary.”

The Top 10 LinkedIn mistakes professionals make. That's the subject of today's show. I'm Jeff Altman, The Big Game Hunter. I'm a career and leadership coach, a former recruiter. And by the way, I'm LinkedIn member 7653. That means of the approximately 750 million people on the platform, I was the 7,653rd member. I've been around for a long time.

So I'm not going to talk with you about not having a profile picture, or using the default LinkedIn headline, or nonsense like that everyone knows that by now. But I want to go a little bit deeper at some of the things I've been seeing recently, that I think really hurt you.

So, the first thing I want to mention is title inflation. You try to snow people by inflating your title, and your responsibilities that make it seem you're more important than you actually are. So for example, the one I saw this week was the assistant director of the two person department. In other words, the the director and the assistant director. No one's impressed.

Number two: not writing a summary, or doing a two line summary that says nothing. summaries are a place where you have an opportunity to talk about who you are and what you've done, and what your capabilities are, as well as what you're looking for. LinkedIn gives you a lot of space to do that. Use it.

Number three, not personalizing connection requests, just using one of the defaults, instead of something that basically shows some thought. It doesn't take a lot of effort. Just do it.

In your LinkedIn profile, you don't use keywords and thus, SEO optimize your profile to draw people to you. After all, on the other side of the equation, LinkedIn is selling what's called LinkedIn Recruiter to search firms and corporations that allows them to search the entire database. Thus, by not having keywords, SEO optimizing your profile to include those keywords, you're pretty well invisible. And thus, you're in a situation where you got a profile, but you're not drawing people to you. You're not being magnetic.

Next one, not being active on LinkedIn. The next time you log on will be the first time in six months. And the only way reason you're doing it is by accident. Log on regularly. If you're on Facebook three times a day, cut one of those out and log on to LinkedIn twice a day. You can do it while you're commuting if you're on public transport. There's lots of ways that you can do it, but not logging on to see whether or not you have a connection request or someone sent you an InMail about a job is ridiculous.

People make the mistake of using emojis, symbols, acronyms, company names and hashtags in the name field and thus, it interferes with the LinkedIn search algorithms that allow people to find you. Don't use them there. You can use them in the body if you want, but don't go overboard.

You know, a simple example is if you're listing points in your profile, you might use checkmarks when you list an item in order to make it visually more appealing. Now we've only got a few more hang in there.

Your profile basically doesn't attract people to you. You know, you're invisible. There are no recommendations or endorsements of what you've done. You know, one of the things about LinkedIn, like any social network, is receiving social proof from individuals that you're competent and capable. You don't have enough of them. Like if you've been in the professional environment for 10 years, you have people who've seen your work. Always ask them to write a recommendation or minimally give you an endorsement.

And the last one, and this is a subtle one, exposing yourself to trouble by not updating your privacy settings, to prevent people that you're connected to who you work with, from knowing that you've made an update. And that's a lot of words for basically saying every time you update your profile, and you're connected with someone, they give you the option to notify people that you're connected with that you made a profile change. Profile changes are normally interpreted as a person's looking for a job. You don't want to do that. You don't want to send a signal to someone that you're looking, especially if you're currently employed, right?

So those are the top 10 that I've identified. Hope you found this helpful. I'm Jeff Altman. My website, TheBigGameHunter.us has a ton more that will help you. In addition, if you're interested in one on one coaching, you can schedule time for a free discovery call or schedule time for coaching. You can find out about my courses and books through the site. There's just a lot there that will help you. You can also subscribe to JobSearchTV.com on YouTube, and No BS Job Search Advice Radio which is the number one podcast in Apple podcasts for job search. No show is anywhere close to the number of episodes I've created during the time I've been on air.

Lastly, connect with me on LinkedIn at linkedin.com/in/TheBigGameHunter. Have a terrific day. Be great

Jeff Altman, The Big Game Hunter is a coach who worked as a recruiter for what seems like one hundred years. His work involves career coaching, as well as executive job search coaching, job coaching, and interview coaching. He is the host of “No BS Job Search Advice Radio,” the #1 podcast in iTunes for job search with over 2200 episodes.