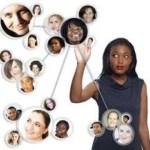 EP 1683 People always tell you to network to the hiring manager but rarely suggest how to do it.

I want to talk with you about networking to the hiring because I'm sure there's a lot that you hear or read that suggests you not apply through the applicant tracking system AND how you do it? How do you get to the hiring manager? Here are a couple of simple techniques to help you.

I want to start off by saying if you are a job hunter and you know that there's an open position, this video is for you. So the 1st thing that you want to do is to make sure that you’re definitely qualified for the role. Otherwise, you’re just wasting people's time. There is no point in that.

Then, you can find someone through LinkedIn who works at the firm (maybe, they are a 2nd level connection, maybe they went to the same college as you. Or maybe they are just a person who works for the firm) and might be willing to help.

Tell them how you know them. So, for example, the 2nd° connection, you might say “we are connected on LinkedIn through so and so.” You might also want from that persona note 1st to say, “I may be reaching out to so-and-so. I see you're connected I just want to give you a heads up that I am going to be reaching out to them to talk with them about a role.

Then, from there, ask them for their thoughts about the firm. How they like the culture. Are they enjoying if there? If you're reaching out to the hiring manager, you want to do it all little bit differently. After all, they are the decision-maker for the role and, as such, you don't want take up a lot of at their time.

But, the fundamental thing is if you're working around you try to find who this person is, the simplest way to do it is by asking someone to refer you. Now, they may ultimately say that they want you to apply through the applicant tracking system. So be it.

The idea is you want to try your best . . . You want to trying getting to that hiring manager. If you're directed back to the ATS, so be it. Try through someone else to get to that person.