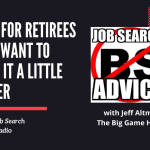 EP 1999 In this video, I suggest work for retirees beyond “continue working in the job you previously worked in.”

Today, I thought I would talk with those of you who are retirees who are considering doing some version of work about different kinds of jobs or careers that you could enter into, in order to be in contact with people, make some money, stuff along those lines.
I want to start by saying, I specifically titled this as "who want to take it a little easier," because you can obviously continue doing the kind of work you've done throughout your entire career, work on a full time basis and continue on. But I want to differentiate it with "a little bit easier." So here are a couple of things that you might consider.
The first one is freelancing . . . and freelancing is hard work. You'll hear me say that with a number of things There's a responsibility that comes with freelancing and to appeal to a client and make sure that they're happy. But, you can freelance at the work that you've done previously, and be able to turn up some interesting work and there are sites like freelancer, or upwork, where you can find gigs along those lines, as well as on Craigslist in your local town. So again, consider freelancing.
Number two is you could be a substitute teacher, or teach part time. Now, I'm not talking necessarily about the school system although with some teaching, that's exactly what it is. But part time there are programs at community colleges, there are programs and schools of different sorts, where you might consider teaching. It's hard work. So, you know, again, I'm going to keep saying that where I think it's appropriate.
You could be a house sitter or a caretaker for someone who has more than one home. So, for example, you know, the town I live in, there are people who have homes here. They have homes elsewhere. They spend part the year here and spend part of the year there. They want to have someone check in on their home. You can either live there or you can start a business where you're checking in according to a schedule to make sure no pipes have burst, no one's broken in . . . stuff along those lines, in order to ensure people that their home is well cared for.
You can work at a resort. That’s one of my favorite ones on this list. And there are a variety of different professions that she could do at a resort where, and this is going to double up with one later on, you could function as a concierge and book tickets for people. You could work at a front desk, you know, you could do this at a resort, you could do this at a hotel. Both of them have similar types of careers, where you could do this kind of work. It doesn't have to be for major hours, but you can put in time working in a resort or the hotel and doing this kind of work.
You could do tax preparation, which obviously has a busy season associated with it. There's a tax person I know locally, and she is busy. From I'd say February through October, it's a half of year of really focused work where she's putting in a lot of hard hours. She's in her 70s, generally good health but the rest of the year, it's not quite as crunch worthy, if you understand what I mean.
You can do pet sitting, you can start a pet sitting business in your area where people may not want to walk the dog, or they want their cats to be fed while they're away. You can set up a service where you're doing this for people and get paid for it.
You could obviously work retail and you're on your feet a lot. Seehat may not be a lot of fun. You could be on event staff. I know when I lived in New York, I would go to the theater. There were the people who would seat you and give you a Playbill. They'd be able to serve you in that role, answer questions, enjoy the show, eventually get bored with a show or the performance but event staff is a role that you can do. You could do that at stadiums, where you're seating people, as well.
Lastly, there's the classic driver. These days with Uber and Lyft, there's lots of opportunities for people to drive. It's not easy work and you're dealing with the public, Not all the time is going to be particularly nice. But it's clearly a profession that people who are older are doing in order to earn income.
So hope you found this helpful. I'm not endorsing any of these, you have to know yourself to know what makes sense. You have to know what makes sense in your local community because you're not going to be traveling hours to do this kind of work, right?