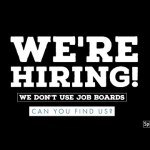 EP 1919 Mac Prichard and I look at job boards and their effectiveness and what you can be doing instead of spending 90% of your time on them.