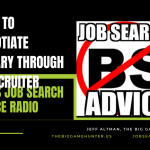 EP 2240 Jeff Altman, The Big Game Hunter explains the dirty little secret of working with a recruiter and how to negotiate salary when you are being represented by one.

You may also be interested in this video, “Salary Negotiations. Negotiating the Package.“

Most of the time, I am a big advocate for working with a recruiter to find a position. Why? There are a few reasons. The relationship with the employer that greases the skids to help you get in the door for an interview. (2) the ease from your standpoint. After all, they handle all your scheduling, as well as all the peripheral nonsense and deflected from you where your inexperience can distract you from seeing the employer as they should be seen.

When it gets to salary to go, there is an interesting dynamic. The recruiter smells blood in the water. The blood being their fee. Their job is to close the deal. That's true whether it is a retained search firm or a contingency search firm. The retained firm will talk very nicely… They won't even address it. They will dismiss it as nonsense, but everyone is working to make living. This isn't social work. Ultimately, they are trying to close the hire and get the position filled, just like the contingency firm.

The tendency is to push and bully very nicely or very aggressively the candidate into taking what the employer offers. I wish it weren't true, but statistics tell me this. That's not the way I will worked when I was still in recruiting. I really did try to make a match on the money. But most recruiters don't. After all, at the end of the day, you are the one transaction and they are going to try to work with that employer for many years to come. As a result, their natural tendency is to try to squeeze you, rather than squeeze the employer.

When you are working through a recruiter, it is important, just like when you are negotiating with the employer directly to know what you will value us. Sometimes, your numbers may be wrong. You are talking to friends who may be shooting from the hip and don't really have any data. You need to know your data and understand that the data reflects a range.

At the end of the day, you want to be in the range and want to drive it up as much as possible. Thus, when you are working with a recruiter, you have to say things to him or to her along the lines of, "They have coming a touch low and I am frankly disappointed. I have other things going on that will come in at a better number than this. Why don't you circle back and see if they will improve."

They will try to probe more and, from their standpoint, the contingency recruiter is panicked and the retained recruiter… I am not going to project on them. I'm simply going to say that they will try to push a little bit harder on the employer to up the number.

Without that, you are basically going to be stuck with the recruiter, the headhunter, the search firm who is going to try to push you into that box of the number, rather than have them try to push back at the employer in a diplomatic way. As a result, you need to be prepared to walk away from the situation if you follow my advice. After all, they may say, "She's not going to take it." Or "He's not going to take it unless you want the money."

In the example of the senior execs, they may say, "I said from day one, $425 and they have come in at $415. I believe my value is 425 and the $10,000 difference. I'm going to make for them. I will make many times over the course of my work for them. If they don't see the value, then this isn't the right place for me." With that, you've thrown the gauntlet down to say, "I'm prepared to walk away unless they had my number."

8 times out of 10, they are going to hit the number. If they aren't, they are being foolish and you don't want to join the company that is populated with fools.

Again, you circle back to the recruiter (this is true of the $60,000-$70,000 position, too) and say to them, "They have come in a bit short. I've got other things going on. This is a market where I can land. I would prefer it being there, but if they don't value me sufficiently. Then I will be very happy this next place I'm talking to.

By doing this, you're going to force them to earn their check and their faith..