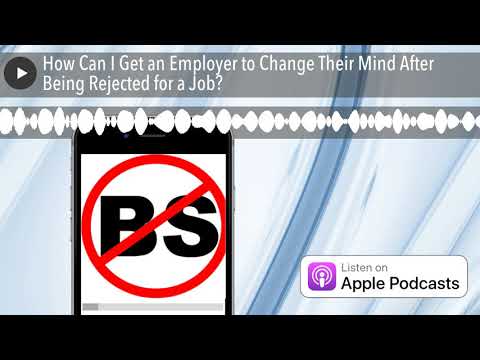 EP 1541 How can you get them to change their mind?

I have always love this question. I have been asked this question a million different times by people and I finally decided to the question it. How can I get an employer to change their mind after being rejected for job? After all, I'm certain that they’re wrong.

I didn't include that part in the title. I just left it to the core element. So, the question comes down to what makes you think that they're wrong? Because you believe that they are wrong? Like you know better than them what they are looking for (which I find absolutely amazing)?

You are able to divine in your own magnificence that you know better than the firm what they are looking for and that you meet it because you have intuited that you have this knowledge into what they really want. What you really want to do is to argue with them that they made the wrong choice. I want to be clear, there is one exception to this rule and that is if you identify bias or sexual harassment as 1 of the criteria. .

So, for example, someone who is discriminated against on the basis of age, race and sexual orientation and it's obvious from the language that was used that this is the case. I am not talking about subtle things. That is going to be a tough one to prove. They are never going to turn it around. But, if you have a significant appeal on the basis of those reasons where you were harassed in the interview (and I will that one in a second), then you have one shot . . . but then the question that comes down to why would you want to work there?

Year ago I remember representing someone who was sexually harassed on an interview and she had the courage to tell me about what happened. I went to the President of the firm, spoke to him about what I had been told and the person was fired. Once they were fired, other people came forward. I will simply say, under those circumstances, there is a chance . . . and she didn't want to go pursue this. I understand why. I'm not sure many people would want to.

And in the case of bias on the basis of age, race . . . a whole host of other things . . . Sexual orientation . . . I'm not sure someone would want to work there knowing that they caused someone's dismissal and they would always be looked at is “that person.”

Hope you found this helpful. I’m Jeff Altman The Big Game Hunter. If you're interested in my preparing you for interviews, critiquing your resume and/or LinkedIn profile, helping you with a salary negotiation, answering your questions about job hunting, visit my website, TheBigGameHunter.us. On the top, there are tabs there. Click on the one that's relevant for you. Order time with me. I’ll be happy to help you

Have a great day. Take care!