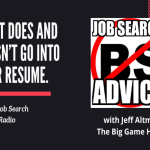 EP 1971 What goes into a great resume? Is it a lot of facts and figures or something else? Jeff speaks with Gabe Heillig of Action Resumes about what you need to put into your resume and not put into it so that you can attract attention for all the right reasons.