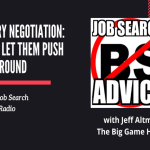 EP 1965 There are points when you’re interviewing where companies try to push job hunters around. Don’t let them do it.

I'm Jeff Altman, and I've been a recruiter for more than 40 years. Now, I do career coaching and leadership coaching for people throughout the United States. Often when people get into a salary negotiation, when they're interviewing, they make a mistake. The mistake is giving away an upper hand to potential employers about salary.
They get into the position early on, where an employer's able to push them around?
"We've got people internally who we think are better than you are. They're making less than you are."
"That's unfortunate. Now maybe they should be looking for a job," should be your response. What they're trying to do is to immediately talk you down and cause you to be willing to accept less, because the follow up question to that statement is
"Are you willing to be a little flexible?" The answer is, "Not yet. I don't know anything about this job," because, again, HR is doing this conversation with you generally. f it happens with the hiring manager, you can say, "No, I don't really know enough about the job, about the organization, about the opportunity. I don't know what my comp could potentially be like. I'm talking with other organizations that are talking with me about more money than you are. And they're not trying to negotiate me down. They're trying to, frankly, you know, see what their competition is like. They're talking bigger money. I'm here because I heard from the recruiter, or I believe your organization has tremendous opportunities here where I can learn and grow and get ahead. But I'm not someone who can afford to ignore compensation. After all, it doesn't sound like much but a $5,000 difference over the course of a career. That's $200,000 over a 40-year career. I can't afford to forget about that, can you?"
The pushing you around stuff takes place early. And if it takes place late, it lets you know that you're one of the winners that they're considering making the offer to. Certainly at that point, you don't allow yourself to get pushed around EXCEPT if you have been out of work for a long period of time. Then you have to play act a little bit and kind of make it seem like, "You know, I know I've been out for a while but I've got another two organizations that seem interested in me. And they're not asking me to be flexible. I'm not sure why you are, but there seems to be a market for I do." If they turn around and go, "Okay, you should take one of those offers."
"I don't have the offer yet. So I'm here interviewing for this role." You see, organizations will try and intimidate because they want to get you for as little as possible. It works better for their budget. Your job is to make as much as possible because the more you make, the better off you and your family are right?
You're the Chairman of the Board of your organization. You've got shareholders-- your wife, husband or partner, your kids, your extended family, whoever it is. You're the chairman of your organization. You have a responsibility to yourself, because, Lord knows, there comes a time where organizations are thinking about making head cuts and they're looking after themselves. They're not looking out for you.
So, again, think in terms of not allowing yourself to get pushed around and not letting them manipulate you into committing to something way too early. They have no business pushing your around.