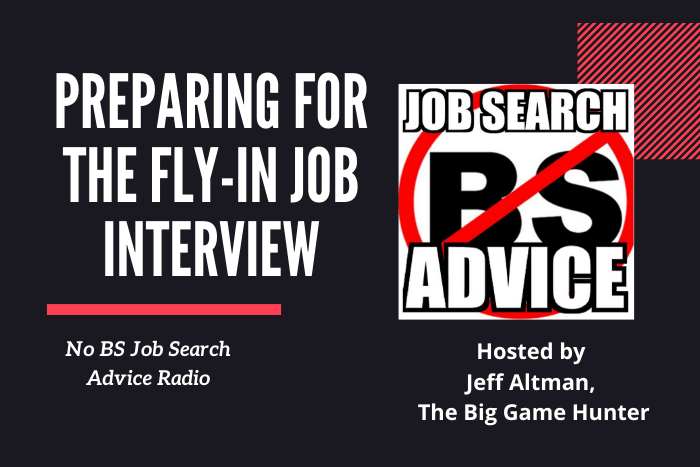 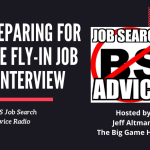 EP 2020 Jeff Altman, The Big Game Hunter offers 7 tips to help you prepare for a fly-in job interview. ‘AND Happy Birthday to me

Today, I'm going to talk with you about handling that interview where you're flown in to be interviewed. Now. It's always easier to do an interview when you're on yourhome turf. You know, I'm an ex-New Yorker. Interviewing in New York was always easy. You got on the subway or bus, you walked whatever it was. You knew the terrain that you were in. It was easy.
But flying's a little bit different because often you traveling to different time zones, your body clock is messed up, you are in unfamiliar territory. You want it to become your home base, but it'sdifferent terrain than what you're used to. So, I thought I would give you some advice for how to handle the flying-in.
At first of all, the ideal set of circumstances is getting your interview scheduled in a way. consistent with your body clock .Now,sometimes this is impossible. I'll give the example of the person who's on the west coast doing an East Coast interview. If you're on a red eye, you get in early that morning. You've got an 11 o'clock interview. you'llprobably be tired. If you can sleep on the plane great. If you can't, you've just got to get yourself going.
If you are an east coastperson heading west, the scenario's the opposite. If you've got a nine o'clock interview, well, you know, it's just going to feel weird to you. So, just be aware of of the time zone differences because, for that West Coast interview for the East Coast person, you've been chomping at the bit since probably 6 a.m. in LA. It's nine o'clock to your body clock and you're waiting, you're excited and you've got three hours to cool your jets for that nine o'clock interview. You just have to be aware of that and manage your energy in a way no matter which way you're flying in order to be able to perform.
Next thing is tojust try and find that the names of the people you'll be meeting with so that, in this way,you have time to look them up on LinkedIn or you can Google them. It just gives you a sense of background so that you're prepared for who you'll be talking with.
Try and set up your flights in a way to give you some time. . . Time to be at your hotel, time that if there are delays ()lord knows are the delays when you travel () and if they're sending a driver for you, be respectful to the driver. Many firms wind up asking the driver how you behaved in the car and how you treated them. Were you rude? were you abrupt? Were you obnoxious? Were you friendly? Were you affable and that sort of thing.
So, don't be discourteous to the driver meals don't deviate from your normal diet, You know, if you're going to be in situations where you're going to be eating with the client, the potential employer, I should say, don't go overboard with the food. look at the menu. Look at the most expensive item, the thing that's going to weigh like lead in your system. The most important thing that you're doing is making sure your energiy isright for your meetings.
Try to know the agenda so that, when you meeting with people, you know, how long you'll be spending with each person. It's kind of like…when yougo to a movie and you don't know that it's a 2-hour movie and you're expecting it to be 90 minutes and you start getting impatient. Well, the reverse is true on an interview sometimes. What you need to do is create a lot of fanfare at the beginning, put on a great show at the beginning and a great show at the end. If you know that 30-minute slots with each person intuitively, you know when you need to crank it up a bit. So, just get an idea of what the agenda is, who you'll be meeting with, that sort of thing.
Now if you're being flown out for what I call an interview day, where you will be meeting with three or four people, often they have an HR person coordinating things. Before you leave the conference center where you will be interviewed, one of the things you want to do is just check in with the HR person, shake their hands and thank them for having you out there. Let them know of your interest () if you're interested () ; If not, just let them know you have a couple of questions you might want to pose in the next couple of days just to clarify a couple of points.
In this way if you are interested, they know. If you're unsure, you're not saying you're unsure, you just have a couple questions.
So I'll wrap up by saying I can't help you with the details of the professional questions. I can help you with everything around and that's what I've tried to do.