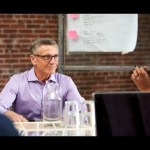 EP 1639 Someone wrote to me and asked about this predicament they were in.

I have a fun question today!

"I work for a blue-chip company and my employment contract is expiring. The CEO has never heard of me. Should I stop by their office and ask if I can help them and how?"

I must in all candor say that as a consultant, you committed the cardinal sin, the most basic mistake a consultant can make. That is, once you're on assignment, making sure the people in charge know who you are and want you to remain there because they see the value in your work. This applies to people in full-time jobs as well.

You see, at the end of the day, if a tree falls in the woods and no one hears it, why should they care? You've done nothing up until this point to make sure that the real decision-maker cares. It also could be that this person isn't going to be involved in the decision for you to remain but, in the way that you presented, it gives me the idea that they will.

So, if you suddenly appear on the doorstep, like a week before your contract runs out and say, "Hey! I'm the guy who… What can I do to help you? I only have a week because my contract is running out…" Well, they've probably already made the decision to keep you are not.

But, remember, they shouldn't happen at the time of renewal. They should be going on all law. You want to stick your face in front of people who are involved with you being retained. You want to be doing great work for these people. It's kind of like in executive support, when they interview people for roles where they will be supporting people in the C suite and secondarily some staff, they ask how a person would prioritize.

The correct answer is: if they are in the C suite, they go first. It doesn't matter what anyone else thinks. They always good for service. Why? If you have to ask the question you are an idiot.

The same thing has to apply to you and your career, whether you are a consultant or on staff. At the end of the day, the real decision-makers (not your immediate boss, but the ones a couple levels up from them) have to know your name, no which are capable of, know what your successes are. You have to market yourself both internally and externally.

You have to develop relationships where you as an individual are thought of highly and you are not thought of as being a pain in the rear.

It's probably too late to do anything but learn your lesson. This applies to you as a job hunter, you looking at your career… Everything you do has to create an impression that you are someone that they want to keep.

Your boss may not be all to save you because they are too low down in the food chain to really advocate hard for you. You have to work your way up and make sure that those in positions of authority know your value. Otherwise, you're just another name on the staff list and they can go, "Jeff is only been here for three months. We've done well without him before, we can do well without him again."

"Who's this Harry guy? He's been here for five years? Never heard of him before. Loser!" Do you get my point?

I hope you never put yourself in that position again.