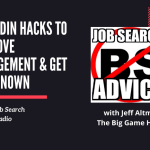 P 1995  I stumbled into an article by John Esperian on rev.com about his experiences with improving engagement on LinkedIn. Good read. Easy to follow advice.

I try to do some research from time to time for these videos and for other things that I do and I stumbled into a post by man and John Esperian who was writing on rev.com. The article is called, "7 Clever Hacks to Increase LinkedIn Engagement." That's the source of this video.
Much of what he talks about is wanting to get yourself engaged with other people so that you become better known. He talks about, Initially, the differences between posts and articles.
Articles are the long form blog posts that you can release on the LinkedIn platform. Posts are the equivalent of a Facebook update or a tweet on Twitter. He says a post could be up to 1300 characters. A comment to that post could be up to 1250 so this is a good amount of space. Articles, of course, are long form and they're designed to reveal your expertise on a subject.
So, his advice is, number one, write a text only post because in his statistics, what he's found is that images and videos don't get the same kind of engagement that a post does . . . which is interesting to me given the amount of time that LinkedIn is encouraging people to provide it with native video. But these are his statistics; I think it's interesting to take note of that.
You want to create enough of a post that you're going to activate the