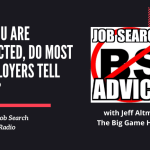 EP 1972 I answer this question about job-hunting and being rejected.