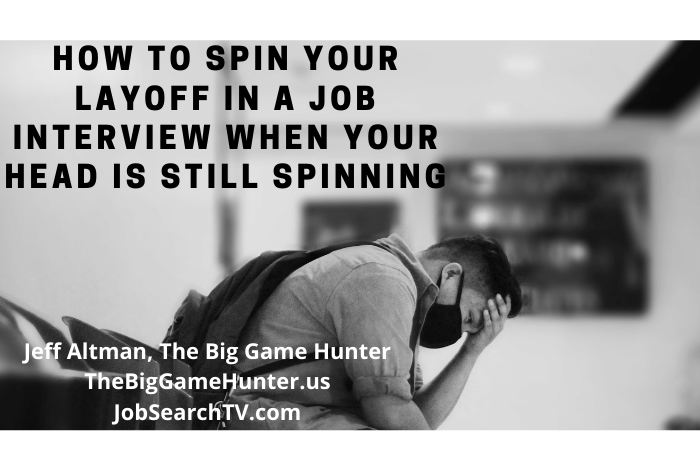 Republished with permission from LiveCareer.com

Losing your job can leave your head spinning at the exact time you need to stay cool, calm, and collected. Keeping a level head during a job search is essential, especially during an interview, where you want to put forward the most positive version of yourself—exactly at the time you might feel most emotional.

Here are a few steps you should take to ace your first post-layoff interview.

You’re going to have the hardest time keeping your cool in an interview if you haven’t found closure with your previous job.

“The first thing is to recognize is that you’re not going to be seeing the same people you saw every day for several years,” Sam Phelps, an executive recruiter at Newcastle Associates, says.

“Your daily routine is different [after a layoff]. I think understanding that and accepting that that’s the case, even if it’s a job that you disliked, it’s still a loss.”

In other words, it is important to reconcile yourself to what has happened before you begin interviewing. You shouldn’t be working out your feelings about losing your job in the interview chair.

Pivot to the future

Accepting the past allows you pivot to the future, points out career coach Christine O’Neill.

First, she says, make sure you stay open and positive when discussing the layoff by spinning off into a discussion about the future rather than focusing on what has happened in the past.

“I think you can kind of address it pretty briefly and succinctly and then quickly pivot into how the experience overall was very positive and that you learned from it,” she says. “Then, explain how you could apply that knowledge and experience into your next role.”

Before the interview, try developing and rehearsing your answer with a close friend or family member. You won’t know whether or not your emotions are raw until you try to speak your answer out loud.

Kendra Stellar, the owner of Stellar Life Coaching, says it’s helpful to practice, to a degree. “I would say know what your answer is going to be,” but don’t practice to the point where your answer sounds canned.

“Plan on it happening and stay in control of the conversation when it comes up,” she said.

Watch out for curveball questions

During your rehearsal process, try to consider the types of questions an employer might ask during the interview. For example, if you were doing a job that was consolidated down to one person when four people previously did the job, the interviewer might ask, “Why did they keep that person and not you?”

The true answer, Phelps says, may simply be that he or she was the lowest paid person, though that’s probably not the answer you want to give during an interview.

“That question would put a lot of people on the defensive,” Phelps says. “I would say mentally preparing for that and trying to be philosophical and keeping a 35,000-foot view is helpful in pulling yourself out of that headspace.

“I would reframe the question,” he adds. “I would try to keep it related to the nuts and bolts business decisions that companies have to make. A lot of times these decisions are based on a spreadsheet, not by looking at an individual.”

One way to keep your cool is to take a macro-level view of your employer’s decision, no matter how personal it feels. A layoff can be explained without throwing your former company under the bus.

“I know people that are in an industry that—due to changes in consumer tastes or technology or other structural things within the economy—lost business, which means the company needs to reduce headcount,” Phelps says. “Then they consolidate, and people are laid off.”

That’s the most generous way to view layoffs, Phelps says, and one you should keep in mind during your interview. “The most generous way to describe a layoff is that these things beyond your control at a macro level happened and that the net effect, when everything shakes out, is that some individuals were laid off from their job.”

Whatever you do, don’t get angry

While most emotions – even regret – have a time and place in an interview, anger is one that is never flattering. Keeping it positive is critical to making a good impression.

“You don’t want to leave the interviewer remembering you as being pissed off,” says Stacey Lane, a career coach in Portland. “It could overshadow your resume and other good qualities.”

“I would never say the company messed up,” Phelps says. “I wouldn’t say, ‘My boss was an idiot.’ I wouldn’t get into that because, quite frankly, you don’t know why they made the decision and to come off negative like that and to personalize it, that’s the kiss of death.”

Set aside time for yourself

One way to avoid getting angry, Phelps says, is to make sure you spend some of your time doing constructive activities while you’re between jobs. After all, it’s tough spending eight hours a day, five days a week looking for a new position.

Phelps cites one client who decided to check out Chicago’s major museums and architecture tours. Others, he says, made a priority out of exercising, taking a class or getting a professional certification.

You never need to manage your stress more effectively than in the heat of a job search.

NEW! Online Mock Interviewswww.TheBigGameHunter.us/mockInexpensive online practice that you can record an I review.

Since 2007, FlexJobs has been the #1 site for work at home opportunitieswww.TheBigGameHunter.us/flex