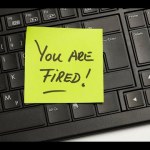 I was thinking that these good times since the recession in 2008 . . . Man this has been a long recovery, one of the longest I've lived through. I think it's also one of the longest ones that the US has experienced since inception. And, you know, it's going to come to an end because they all do. I don't know when but they all come to an end. Even if that isn't the immediate circumstances, there are winners and losers in the way of organizations and thus winners and losers in the way of staff that are affected by the health of their organization. So, I thought I would do a video today about how to avoid being fired, reorged, outplaced, canned, re-trenched . . . whatever you want to call it . . . Taken out back and shot. You know, how you avoid this.

Understand, there are no guarantees. If they firm is going out of business, if an industry is being decimated, you are going to be affected. It's like, in New York, taxis are being replaced by Uber and the result winds up being there's less opportunity for folks than there is now for cab drivers. Truck drivers are going to be replaced by autonomous vehicles. That's can wipe out a lot of jobs, but the impact winds up being that folks need to be prepared and, where you can minimalize the impact, where you work in an organization where the things that you can do proactively to head this off, you should really do it. So, let me just give you a few suggestions for things that you can do.

1. Notice what the politics is in your organization. Who has power. Who has authority. The long and the short of it is every organization has politics I worked for a firm some years ago where there were two people who really ran the operation and, unless you were beholden to them, that one owner came down and the owner only listened to what these two people said. It made no difference how successful you were, if you weren’t on the good side of those two people, you would have problems and you have to notice how this works. There is politics in every organization. There are people who are influencers. There are people who actually have power. Thus, if you rub against the grain, you are going to be affected. So, if you're concerned, a attention to the politics.

3. The third thing, and I know I excel at this, is the notion of self-promotion. For you as an employee of a firm, you can create a brand for yourself, apart from the organization. So, for example, employees who says, “Hi! My name is ___ I work for Facebook or Google is branded with the name of Facebook and Google and people's impressions of those organizations. During good times, that's great. However, there are times where organizations are in less prominence and the impact on the individual can be detrimental. So, you look the brand yourself personally apart from your organization, complementing it, not opposing it, but complementing it. So, for example, when I did recruiting, I worked for different firms. I worked three different firms is a contractor at the search for and I branded myself as Kevin the Big Game Hunter, which was a play on the notion of being a headhunter. I marketed myself; I promoted myself. Resumes I submitted on behalf of candidates had my name, “Jeff Altman, The Big Game Hunter and the firm’s name so as to be respectful to the organization that was paying me.

4. The mistake make that I was brand that I had, The Big Game Hunter . . . I didn't know it at the time, but once I transitioned into coaching which I wasn't thinking of it that point, it was a benefit for me, as well. Everything was about having me stand out in a certain way. It's not just simply that term, The Big Game Hunter, but it is all the contents I have created, the thousands of videos and podcasts. All the articles I've written. The books, as well that all involve “Jeff Altman, The Big Game Hunter. You can do that, too, you don't have to be as dramatic as me. You can write articles for LinkedIn, and medium.com and other platforms and start to stand out as a professional in your industry so that (#1) so that your current organization respects you and (#2) so that recruiters notice. They may want to reach out to you with opportunities.

Remember the person who gets ahead isn't always the smartest or work the hardest . . . Although those are great qualities to have. People get ahead by being alert to opportunities. Sometimes they are internal to your firm. More often than not, they are external.

So, I’ll simply say that, for you as a job hunter, those are three ways that you can get ahead.

Jeff Altman, The Big Game Hunter is a career and leadership coach who worked as a recruiter for more than 40 years. He is the host of “No BS Job Search Advice Radio,” the #1 podcast in iTunes for job search with more than 1200 episodes, “Job Search Radio,” “and his newest show, “No BS Coaching Advice” and is a member of The Forbes Coaches Council.