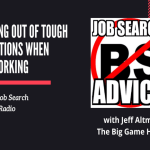 EP 1966 I discuss a few awkward situations you might find yourself in when networking and how to get out of them.

I am Jeff Altman, The Big Game Hunter, I coach people to play their professional and personal games big. In doing so, people will talk to me about their discomfort with networking so I thought I would talk about two of the situations that are most uncomfortable for people and teach you (or remind you depending upon your circumstances) of how to get yourself out of it.

The first one came up in a conversation I had with the coaching client yesterday who talked about being in an informational interview with a former colleague. They've moved on and now they get to the part of the conversation where they talk about how they would be open to something else which the former colleague interprets as being, “hey! You hate it just like I did!” Then they go on this lengthy tirade that's really uncomfortable for you about how the firm you work for is terrible period how they wrong them and all you feel like doing is getting yourself out of their.

Here's the way to head that off and deal with it. Ready? You need one prop and that is your phone period here is what I want to do. When you arrive to such a meeting, let's say you are meeting someone for lunch or coffee or whatever, I want you to make a great flourish out of telling them that you can turn off your phone now or putting it on airplane – – actually put it on airplane mode, that's a better way of doing it. So, as soon they get there, say “I want to give you my attention. I’m going to put my phone on airplane mode,” and then you turn it over so it's face down.

Let's say there is a great conversation going and then it switches and you're starting to feel uncomfortable. I want you to switch it to right side up so you can see the time and flick the time up so you notice it. Then, from there, if the conversation, if you the person you our networking with persists in going on this lengthy uncomfortable tirade, you pause for second, take your phone and go, “I have a call I need to do in about 15 minutes that I need to head out for.” Or, “I have a call I would be getting shortly that I don't want to disrupt this with.” Or, you can do the “looking for the waiter or waitress to get the check over to the table” kind of scenario. This is definitely one of those cues of ending.

The phone is like a subtle one. You do a big flourish about turning it down, barely noticing about turning it face side up, looking at the time and then, from there, say, “I have somewhere I need to be in…” or “I have a call that I am expecting that I can't really take here. So, what I would like to do is…” and then you set the next conversation. But what you've done is and that set of circumstances.

Another one is and the networking meeting. You are going someplace two network. Maybe it's a professional group. Maybe it's a job search club. Whatever it is, there is a networking part of the evening. Here’s what you do.

Number one is don't stay leaning against the wall. Always put yourself in the middle of the action. Number two is, let's say you are getting buttonholed by someone who's talking on and on about things are of no interest to you whatsoever.

Here is a subtlety. There is a gender difference that comes into play and, for guys, some of you may be able to do what I’m going to suggest and say, “hey, let's go talk to that guy over there,” or, “This is a networking meeting! We’ve got to go network, right!? As much as I would like to talk to you, we’ve got to go network with some other folks. So, let's exchange cards. Pick up on one another,” and then you go off your separate ways.”

For women, you can't necessarily play it that same way because all the gender biases come up. You know, that she (meaning you) are obnoxious… I’m not going to go through the entire list. You know it intrinsically. So, you might just do this subtle move of say, in a suite, by saying, “who you do you think would be the most interesting person around here for us to get to know?” So, you kind of get them into the conspiracy. Then, if there is someone you are particularly interested in meeting, you might just simply say, “how about that one over there? What do you say we walk over and get to know them?” Then, when you get over there, what you're able to do is get that person's attention, engage in the conversation and, invariably, what happens is the person that you trying to ditch feels ditched and they go away. So, what you've done is create a bridge to the new person the kind of lets the other one wither away.

So, that's a couple of techniques that you use to extricate yourself from awkward moments. If you have different ideas, leave them in the comments area on YouTube. It Will help other folks. If I like them, I will give you big thumbs up. If not, I may leave something in response, but you just go out and help some folks. Give people some ideas.