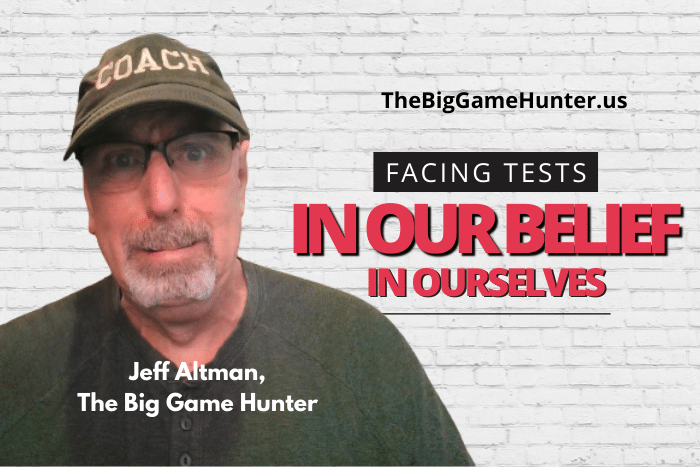 Facing Tests in Our Belief in Ourselves

A while ago, I faced one after almost losing a deal I was working on for months. The candidate was someone working under an H-1b and was in the US working for less than market wages for a firm and was being hired by a client of mine at more than market rate.

They weren’t “stealing a job from an American.” The client had been looking for 6 months and had not found anyone until choosing to hire this person. There was happiness all around as they filed paperwork for what should have been a routine visa transfer. Then the government decided to request additional information delaying the hire.

This should not have been a big deal but a client needed this person to start by a particular day and the delay caused by a government bureaucrat with nothing else to do was jeopardizing (1) the start of the project, (2) a system being developed on time and within budget, (3) whether my client should go forward with the hire and a host of other ripples in the scenario.

As a headhunter in a global Depression, getting people hired is a challenge and this one hurt my insides. I had worked for months before finding this person only to have the government mess things up.

This weekend, I watched a woman test for a higher belt at Taekwon Do. There were thirty or so intertwined moves required at her rank and I could see a slight limp as she walked to her spot on the mat to test.

Each time she would begin her form, there was some point in the routine where you could see it broke down for her and she would stop and be upset with herself. She would try again only to have it break down for her at some other point.

I stared at my watch several times. Testing is often agony for me. However long the testing is announced for, I have learned through experience to add an hour. This one was scheduled for three hours. Each time this woman struggled with her form, the more likely the prophecy would occur.

But I was being selfish and impatient with someone going through a crisis of confidence and once I realized this, my attitude shifted.

She was brought to the back to be worked with by a black belt. She would come back out and the same thing occurred.

And when she completed the first form, I rose to my feet to applaud wildly at her determination and perseverance.

Then came the second form and the same process happened again. She would start get part of the way through the form before losing the order of the sequence. You could see her kicking herself and feeling humiliated in front of hundreds of people yet again.

The Master spoke with her and gently and lovingly encouraged her, telling a story about himself and that all people at some point have tests like hers. He continued by telling her of one test he did where he blanked out and spontaneously created a completely new form.

And with time, patience, determination and support, she made it.

What happens to you when you have your crisis?

Do you go off into a corner to lick your wounds or do you face the demon, stare it down and move forward?

I am reminded of an old story about how lions hunt gazelle.

Lions love to eat gazelle but gazelle are much faster than lions so the lions have developed a system for hunting them.

In this system old lions lay and wait, hiding in a place where they do not have to run. After all, they would never catch the gazelle. The young lions chase after the gazelle and herd them in the direction of where the old lions are lying in wait.

Just as the gazelle get close to where the old lions are, the old ones stand up and roar. The gazelle are terrified and turn tail and run back in the opposite direction to where the young lions are who have no trouble catching them and killing them. The entire pride of lions is able to feast.

If the gazelle were able to face the fear and run into the teeth of the old ions, they would escape. Fear paralyzes them and leads to their demise.

Go to your roar.