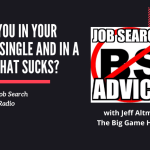 EP 1982 Do you want to wake up one day like your parents and wonder if they wasted their lives?

I want to do a video to talk to those of you who are in your 20s, single, and in a job that sucks.
Let me preface all this by saying, in working with people as a recruiter, and, now as a coach, who are in their 50s and 60s, and in jobs that they think suck, they made a decision years ago to make a sacrifice. They did it because they had kids, the house, you know, the wife, husband or partner, they had obligations they felt and sacrificed years of their life to something that, at this point, they're trying to flee from.
For you who are in your 20s, why are you putting up with this? Seriously, why are you allowing yourself to be in a job, that's awful? I say this because you have choices.
You see, the big obligation you have is rent, and you can go find something else, and not have to deal with the job that sucks. I'm not saying to quit today. But get the hell out of there. You don't want to look back 10, 20, 30 years ahead and wonder where your life's gone like so many of these folks do.
I don't know how old your parents are but I'll just simply say most of them have died a thousand deaths at their office or with their work, because they're doing things they don't care for.
You didn't go to colege, you didn't start a career to do work that you hate. Go find something else to do. I don't if you don't know what you know, try things! You'll figure it out.
And if nothing else, you'll figure out what you don't want to do and eliminate from the list. But the big thing is to try. Now, you can get a coach to help you, I don't think you need that. If you need an impetus for coaching, contact me and we'll set up a time to talk but I'm not trying to push coaching on you. I just want you to get the hell out of the role that you're in, not screw a landlord or do anything along those lines but find something else to do professionally,
Start a business. Find a new career or find another employer that would hire you to do the kind of work that you do. Get concrete about what it is that you don't like, and move on from there because, otherwise you'll wake up years later and wind up being on the couch with a therapist or with a coach like me and trying to make a correction . . . and you feel trapped because you've got those other commitments.
For now, while you don't, go somewhere else; do something else. It'll change your life. And that's what you were trying to do all along. Live the life that you wanted, and not feel trapped. Be excited about it. Be proud of it. Have fun, enjoy yourself and not do what you're doing now.