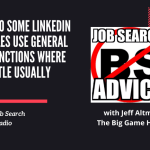 EP 1987 Answer to yourself before watching my answer.

So I've got a fun question today. The question is, "why do some people on LinkedIn use general job functions where the title usually goes?"
It's a good question and I see that from time to time. There are a couple of possible reasons why people do it .Before I go into those, there are two areas where this can occur.
Number one is In the headline are The headline is where your name is. And then there's the line underneath it. So, underneath your name is one area where people often put their title. The other one is underneath their current and previous employers.
Both of areas where titles are pretty common. Now, in the in the case of the first one where we're dealing with, the. title, sometimes, isn't the best way to describe oneself. It's often best to think in terms of keywords and what the attraction would be in someone doing a search for you. So, if you think of LinkedIn and your individual profile as being something that needs to be search engine optimized like a website ,you want to have keywords there that will be attractive to firms looking for you.
So , inmy case, I might use the term recruiter .Headhunter. Terms along those lines because those describe what I do professionally and will be recognized by LinkedIn. (NOTE I NO LONGER DO RECRUITING)
Now, In either case, title sometimes are not quite descriptions. So, I sometimes see titles like "associate level 13. "What the hell does that mean? How is it different from an associate level 12 or 11 or 15? Instead of that, a pe?Rson might use a descriptor in that field in order to describe what it is that they do. So, that's one possible reason why someone might use terms that are search engine optimized or searchable or searched by people in order to be found in that spot It's not my ideal choice, but it's really a reason why.
Another reason why people do it is they made a mistake. They don't think their title is particularly relevant and it might be. So, sometimes people have mistaken notions of what should go in there, even though it's very clear. It says position so they duck the subject.
Maybe they're trying to indicate that they are not as high level or not as low level and they're trying to be described by function. But, when all is said and done, you know, when someone is being interviewed or spoken with my phone, they're going to be, "so what's your title," because it's a missing piece of information. Anything that's an omission or a conscious ommission becomes an area of Investigation by interviewers because they're curious.
Why did you choose to do that? Most people are relatively compliantand they do put in the position title. And why didn't you? That's the way I think. Anything that's out of the norm, I want to know more about . It doesn't make it bad, but it leaves me curious.
So far., I'm giving you the answers of. "they wanted use a search term and make that immediately visible." Sometimes it's a mistake that, most of the time, frankly,it is a mistake that job hunters make by putting it there because, frankly, you know at the end of the day, there's so much text particularly in the summary area where you can keyword stuff your profile to make it very attractive for search terms though.
Three main reasons I see .What do you think? Leave us a comment below. Let me know what your thoughts are.