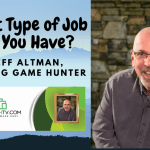 EP 1918 Which role do you fall into? Was your job safe when the pandemic hit?

The title of this video is fairly provocative. It's so one where I say there are three basic roles in organizations. Which one are you? Which one is safest when the next downturn comes? You know there is going to be another downturn, don’t you, it's not like the economy always goes up. The economy never always goes up period when it starts to come down, as is likely to happen over the next year or two, which job is safer.

If you look at a lot of the personnel, they are foot soldiers. They are not asked to think. They're the ones that they hire because they are team players. You know, the ones who are not asked to think. They are the ones who are told to do and just go into the battle like little robots and, eventually, you get fired. You don't make enough money, you quit. Sometimes, something happens and you leave because you are disposable. They don’t care.

There are people who think the big ideas and, often, these are the ones that help make a firm billions. That rare category may be saved and is, but sometimes it isn't. The ones in the middle who can tweak those big ideas and make them better. So, let's look at recessionary times.

In recessionary times, firms get into the bunker; they are fighting tooth and nail to save themselves. Certainly, that was a case in 2008 we are firms didn't know if there really make it to the other side of the recession or depression as it really was. So, all firms care about is, “we gotta sell more. We gotta put more products in front of people period we’ve got to make money and do it had the lowest possible cost.” And that meant we are going to get rid of a lot of everyone. So, no new ideas were created. They didn't as many foot soldiers and since there were no new ideas being created, they didn't need that “tweener-type” between the two.

So, the answer to the question is, it was a trick question. It doesn't matter!

You have more of a chance if you're an extremely high level and you have great ideas and you are known for great ideas. You will have a great shot at riding it through. You may have to take a little bit hiatus from the great ideas to get into the bunkers, but, at the end of the day, firms really value those people. They do not value the ones of the bottom. They don't value the ones in the middle because, frankly, those are disposable.

It's funny, I was doing a podcast with Rick Gillis and his premise is that it's important to promote yourself throughout your career. I will tell you, even if you're the person with the great ideas, if no one knows it was your idea, someone else's going to get credit for it.

You've always got to be out there promoting yourself, not just simply in your organization, but outside your organization. You want to be the speaker at the conference talking about that great idea that your firm had that made them hundreds of millions or billions of dollars. You want to be that person that everyone knows who is the one that developed (I don’t know) the design for the iPhone. You were that brilliant individual who created that one feature. You are Mark Zuckerberg, Larry Ellison you are that great innovator for your organization.

Otherwise, if no one knows, no one knows! They get rid of you. No one hires you because you don't carry that reputation. You don't have that brand in the marketplace that makes people attracted to you.

So, it's not just simply what category you fall into, whether you are someone who has great ideas, can tweak those ideas or can make those ideas work (you know, the soldiers as I call them before).