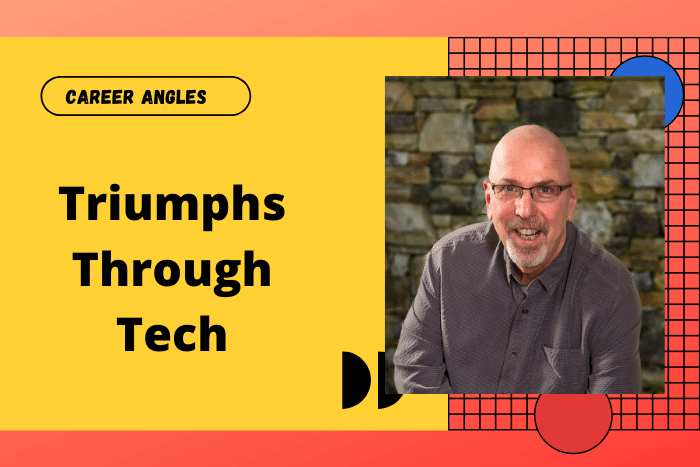 How does success relate to tech habits? We surveyed 1,000 working professionals to find out what role tech plays in their routines, device preferences, and social media usage.

Editor-in-Chief
Republished with permission of ResumeLab.com

Knowing what time Bill Gates likes to wake up or how many hours a day Anna Wintour spends playing indoor tennis gives us insight into the routines that may help inspire their creativity or accomplishments.

But what about the way they treat technology in and out of the office? Steve Jobs, the late visionary mind behind Apple, famously wouldn’t let his children play with iPads. Conversely, employees at Tesla are not unaccustomed to receiving very late-night (or early-morning) digital correspondences from Elon Musk. Bad technology habits can say a lot about our personalities, but what about the technology habits of successful people?

For a closer look at how we interact with everything from smartwatches to laptops and digital home assistants, we surveyed 1,000 working professionals about how their self-identified success related to their tech habits. Read on as we explore the relationships of routines, device preferences, social media usage, and screen time with perceptions of success.

Before we asked survey respondents to draw connections between how they use technology and their success, we asked them to define what it means to be successful. 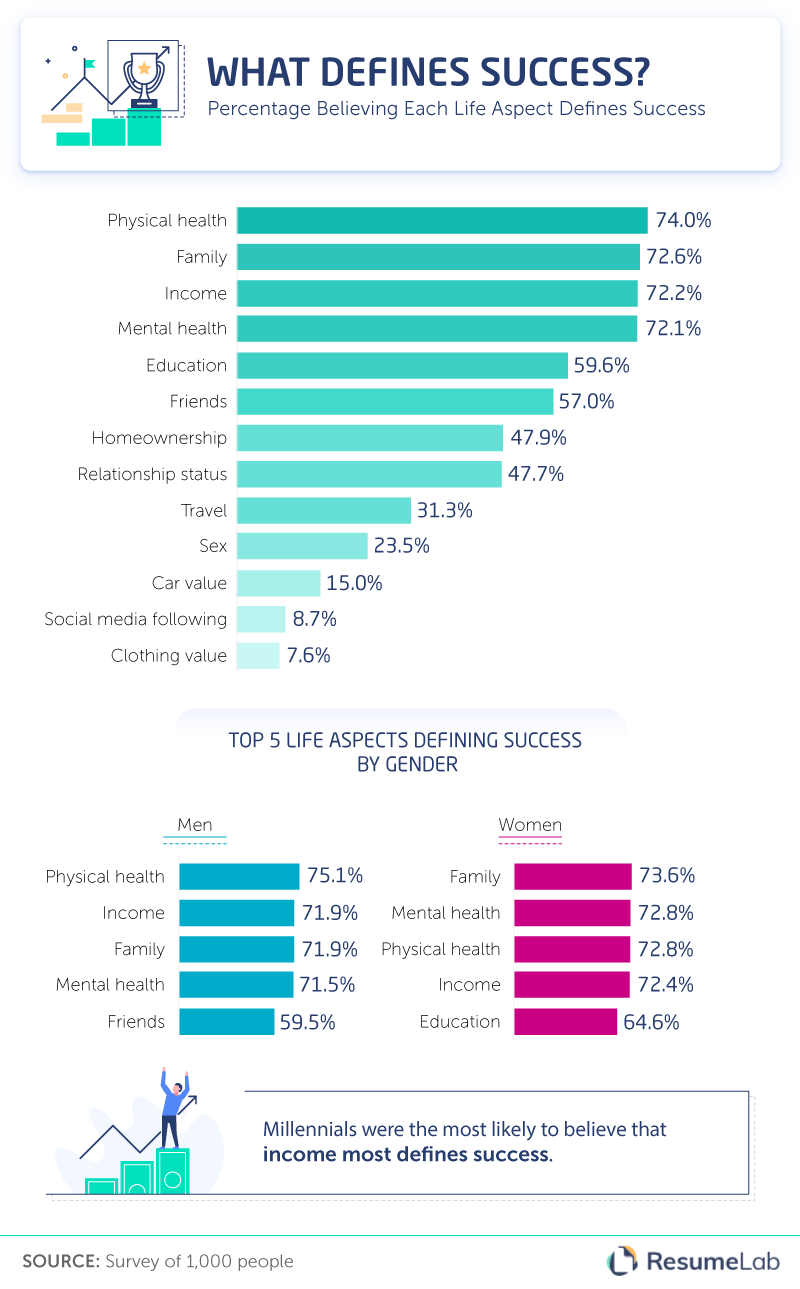 The three life aspects that respondents most believed defined their success were physical health, family, and mental health. More specifically, women were more likely than men to consider income as a factor of success, in addition to family (nearly 74%), mental health, and physical health (almost 73% each).

Conversely, clothing value (nearly 8%), social media following (about 9%), car value (15%), and sex life (over 23%) were the least likely to be seen as having a connection to success.

A work-life balance describes the relationship between the amount of time a person spends at or on work compared to the time they have for themselves or their family. Not only does finding the appropriate balance between life and work help to reduce the likelihood of chronic stress disorders, but also it can improve mental wellness by reducing the risk of depression, anxiety, and insomnia. 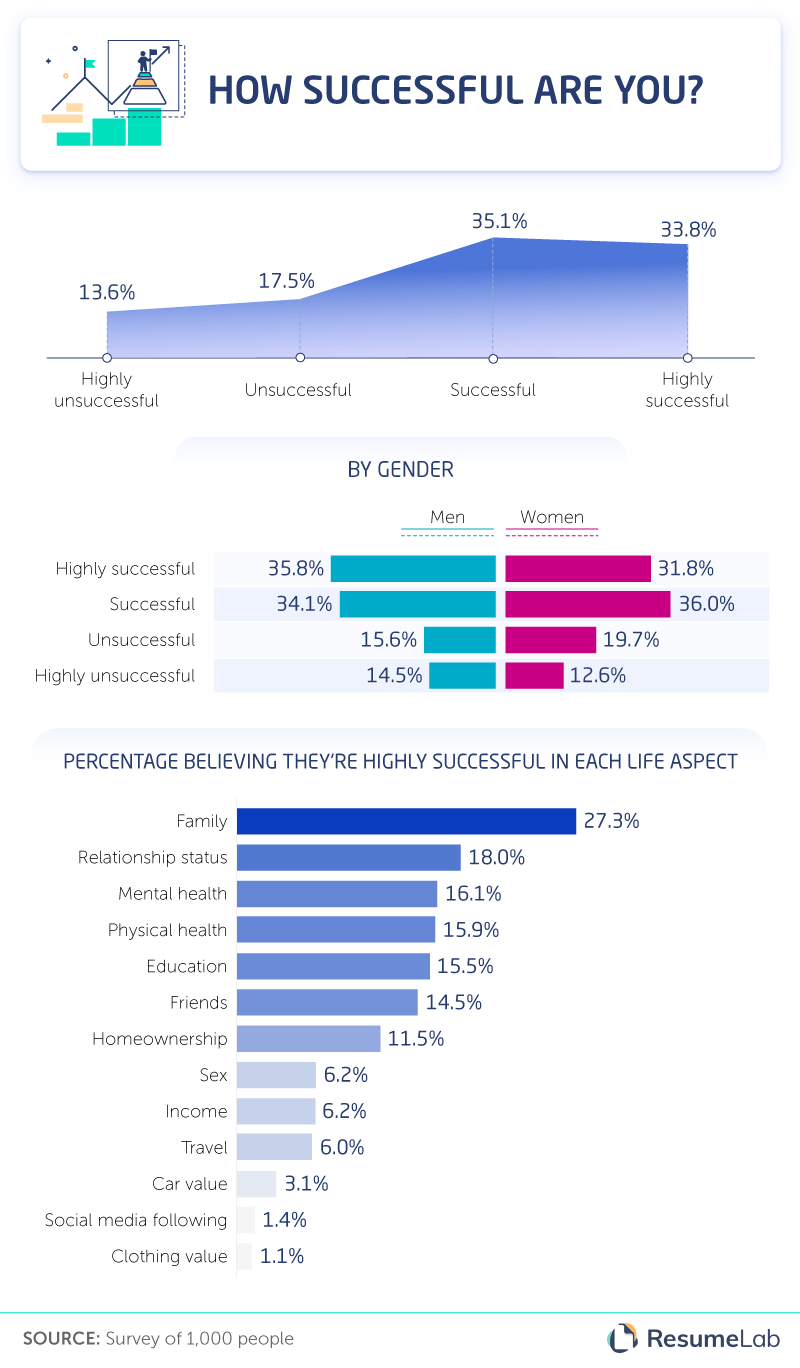 While income was among the leading contributions of success, just 6% of respondents believed they were highly successful in this area. Instead, people were more confident when it came to family (27%), relationship status (18%), mental health (16%), and physical health (16%).

More than just what time you wake up, what you eat for breakfast, when you work out, or how you pass the time on your daily commute – our lives are full of routines, each an impression of our personalities or tendencies. Our relationship with technology is similarly interwoven with our habits and character. 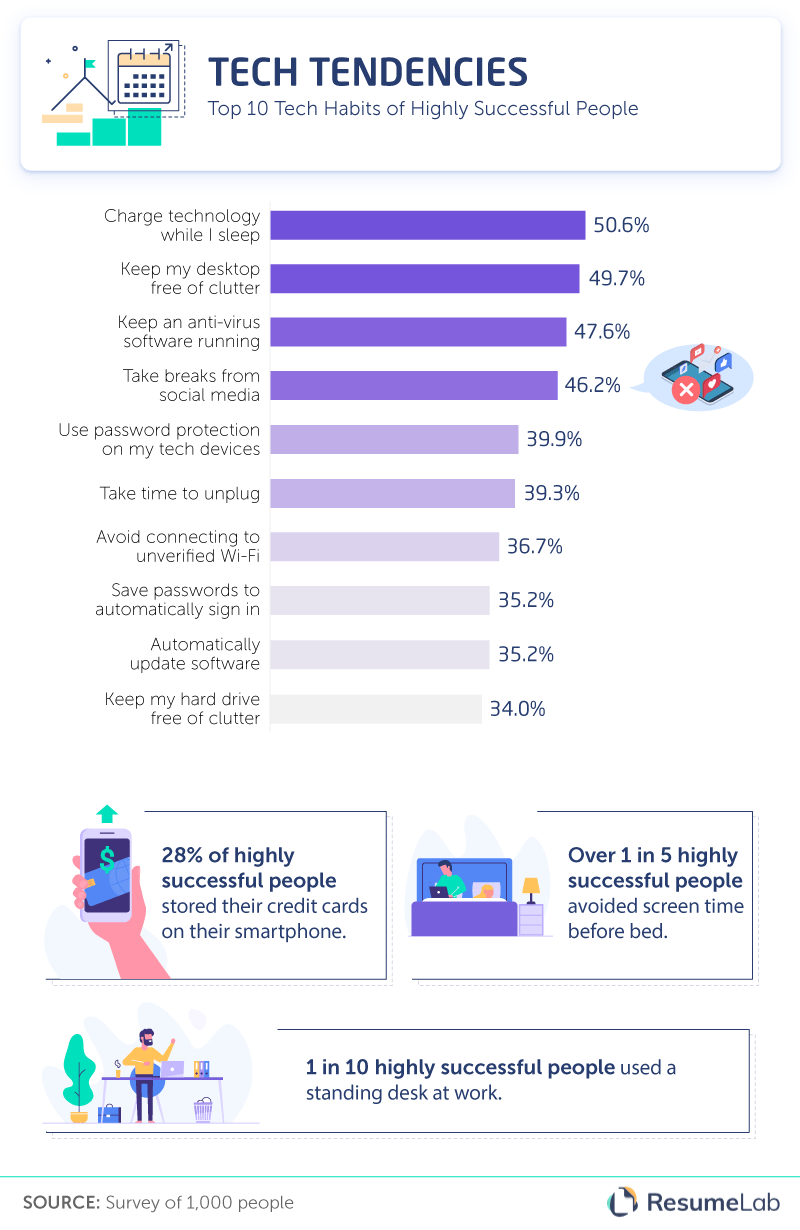 Among people who self-identified as highly successful, some tech habits were more common than others. More than half of accomplished respondents said they charged their technology while they slept, and nearly as many kept their desktop free of clutter. Other tech habits linked to more successful personalities included running anti-virus software and taking breaks from social media. Over 1 in 5 highly successful people avoided screen time before bed, and 1 in 10 incorporated standing desks into their work routines.

Among the habit differences between self-identified successful and unsuccessful people, more accomplished respondents were 12 percentage points more likely to travel. 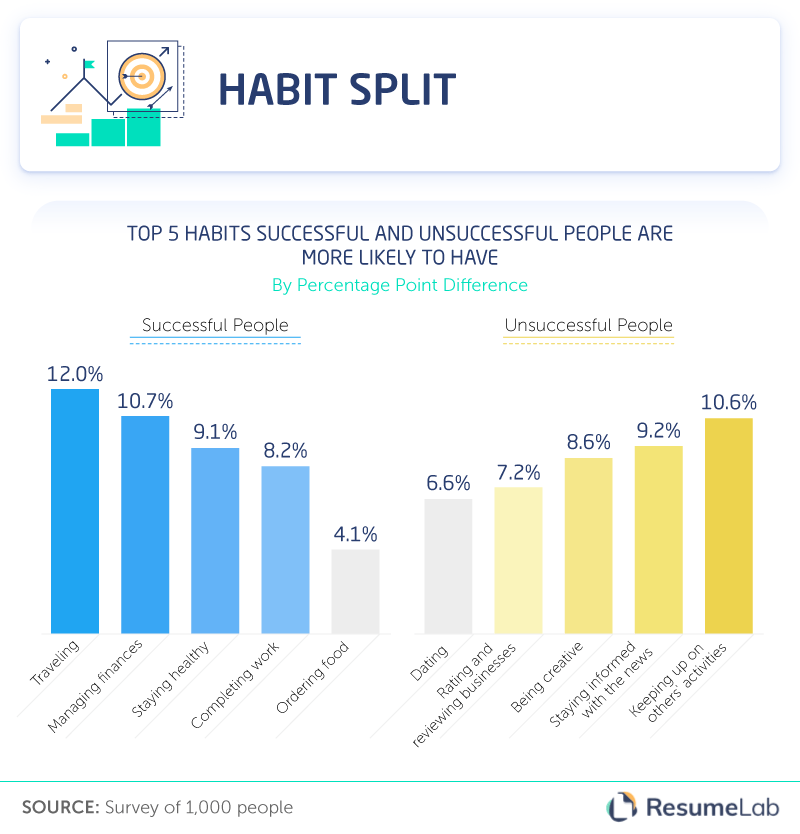 Committing time to travel may also be a sign of a healthy work-life balance among those we surveyed. A quintessential element to any healthy working environment, maintaining a balance between the amount of time you spent working and the time you commit to tuning out of the office and focusing on life instead not only prevents stress and burnout, but it can also have physical health benefits too. People who spend too much time working, or who let work take up too much space in their daily lives, may quickly begin to experience fatigue, mood swings, irritability, and an overall decrease in work performance.

Unsuccessful people also had their own unique tendencies. Those who self-identified as less accomplished were nearly 11 percentage points more likely to stay updated with what other people were doing and 9 percentage points more likely to stay informed via the news. In both cases, people may find themselves worrying about things they can’t control. As both a drain on your focus and a trigger for fear, experts recommend finding a way to differentiate between ruminating over negativity and problem-solving.

The types of electronic devices (and, in some cases, brands) you invest in may speak to a higher level of success. While there exists some debate among business owners about the productivity associated with a laptop or desktop computer, we found almost 83% of highly successful people used laptops compared to desktop computers (nearly 57%). 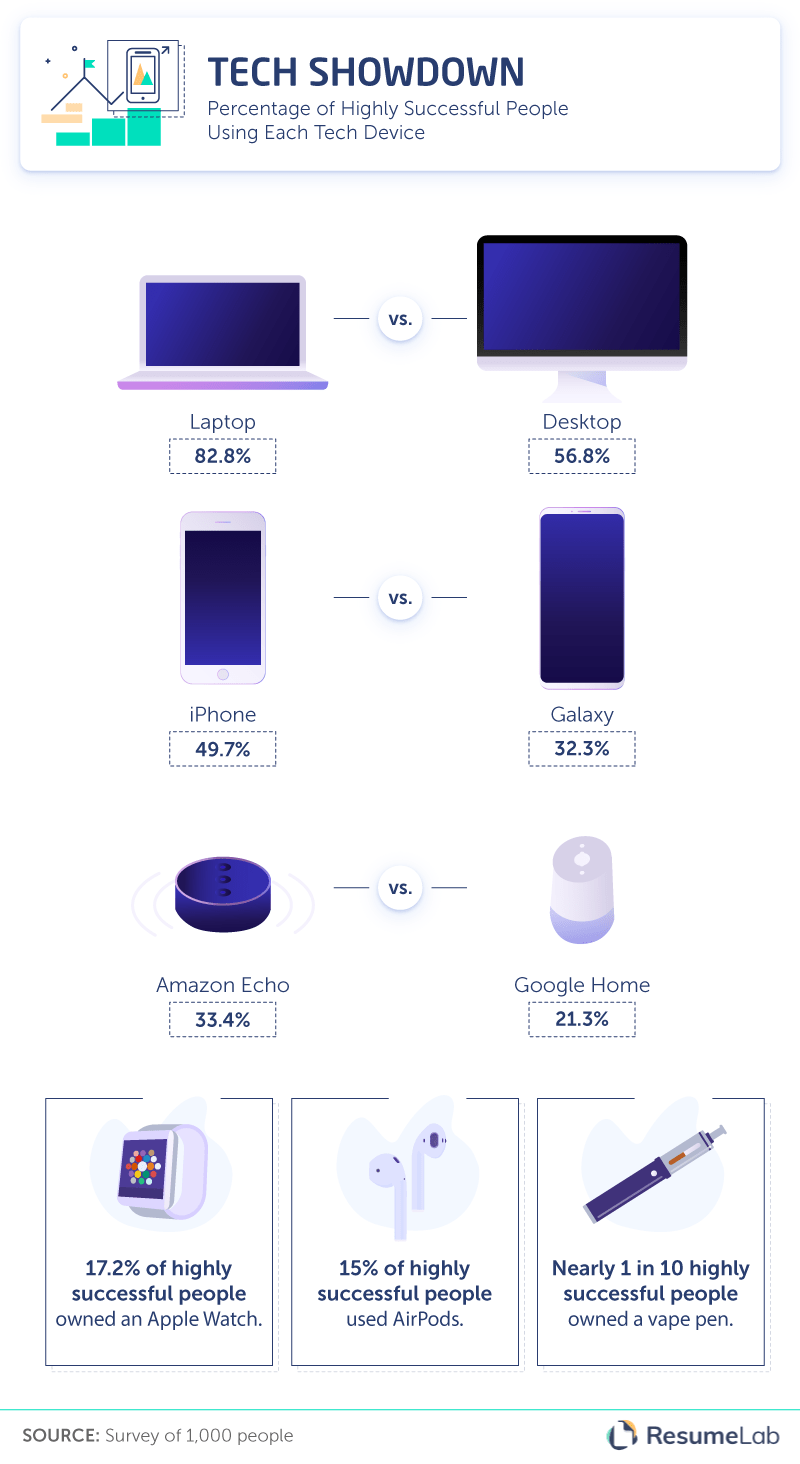 Despite concern that social media might be a major distraction, employees who interact with social media at work are actually more productive than those who abstain while at the office. 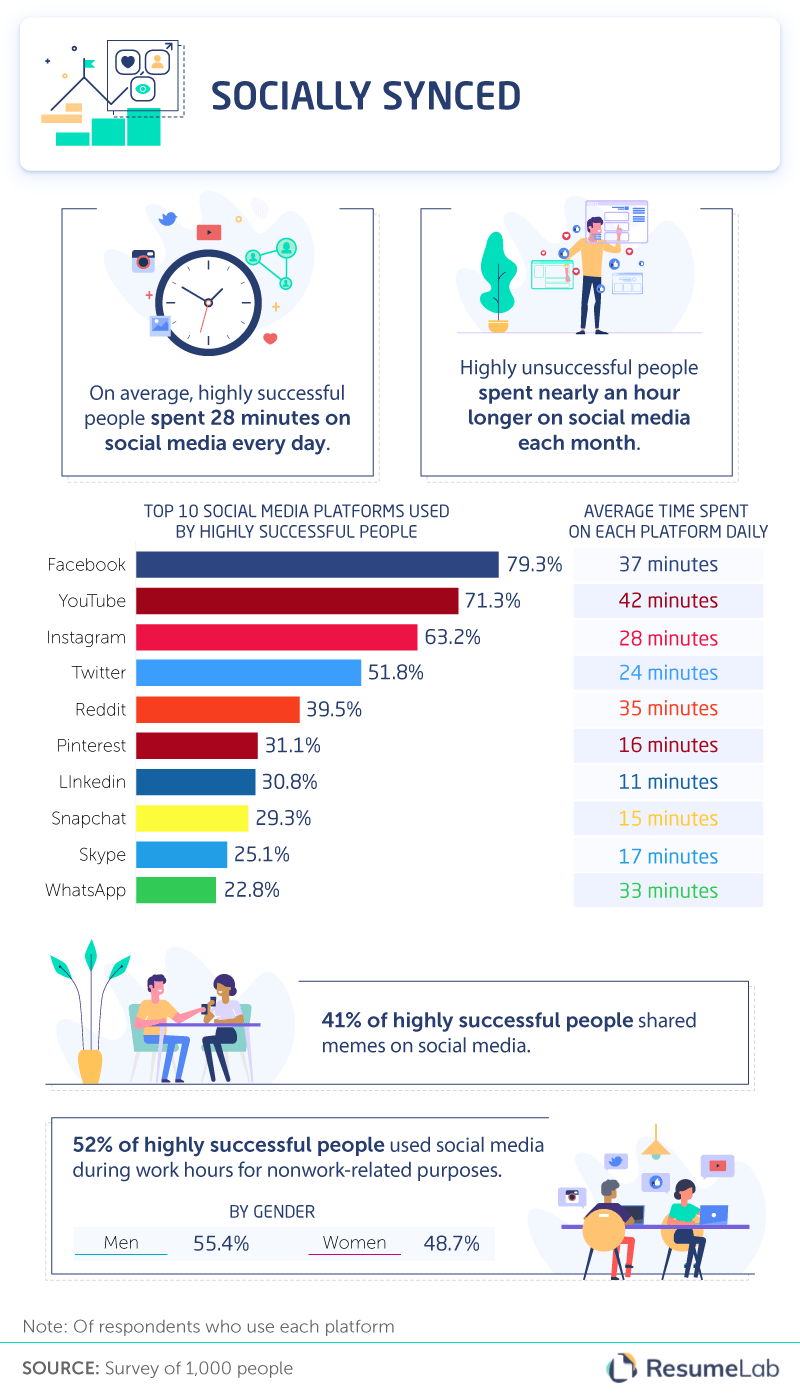 More than half of highly successful people – including over 55% of men and nearly 49% of women – admitted to using social media during work hours, though not for work-related purposes. According to some experts, having access to certain social media platforms while on the clock can help inspire an innovative thought process and encourage better forms of collaboration. Not to be confused with slacking off, taking micro-breaks throughout the day at work, the get up and move around or even to check your phone, can help promote increased emotional health and prevent “decision fatigue” that wears down your willpower and reasoning. Giving employees the freedom to take small breaks on the clock can also serve as a powerful motivation tool that ultimately boots productivity around the office.

Seventy-nine percent of highly successful people reported using Facebook, more than any other social media platform, for an average of 37 minutes every day. Some analysts suggest Facebook can build connections between people, increase productivity when used in short bursts, and form professional bonds between organizations. Like Facebook, YouTube (42 minutes), Instagram (28 minutes), Twitter (24 minutes), and Reddit (35 minutes) were among the most used social media platforms by highly successful people.

Just because social media platforms can help doesn’t mean they should be a go-to resource for staying organized and getting work done, though. Instead, some turn to productivity applications to track and monitor task statuses, daily to-do lists, and long-term goals. 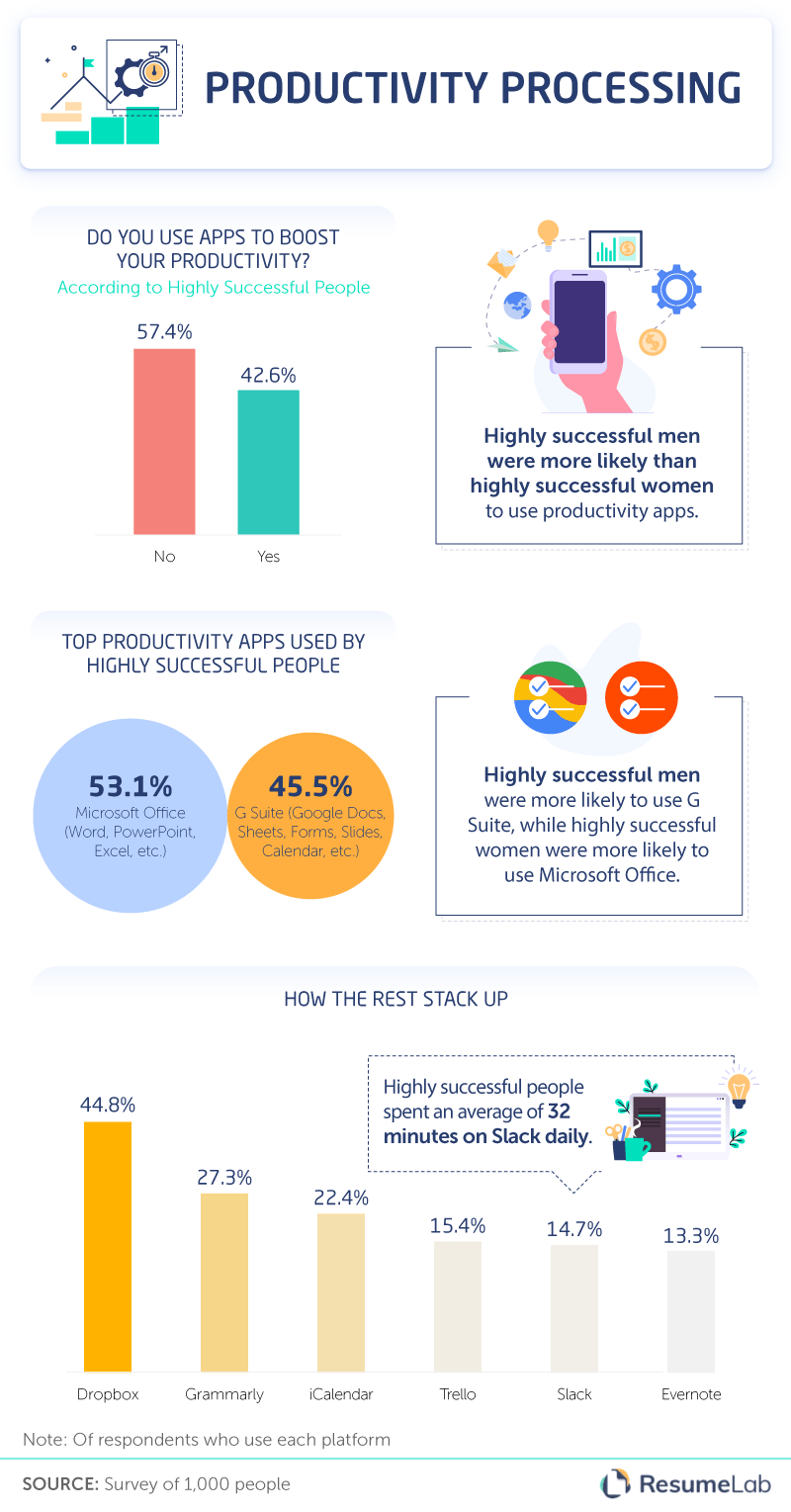 Some famous businessmen – including Mark Zuckerberg, Richard Branson, and Mark Cuban – point to just one thing as the key to success: exercise. 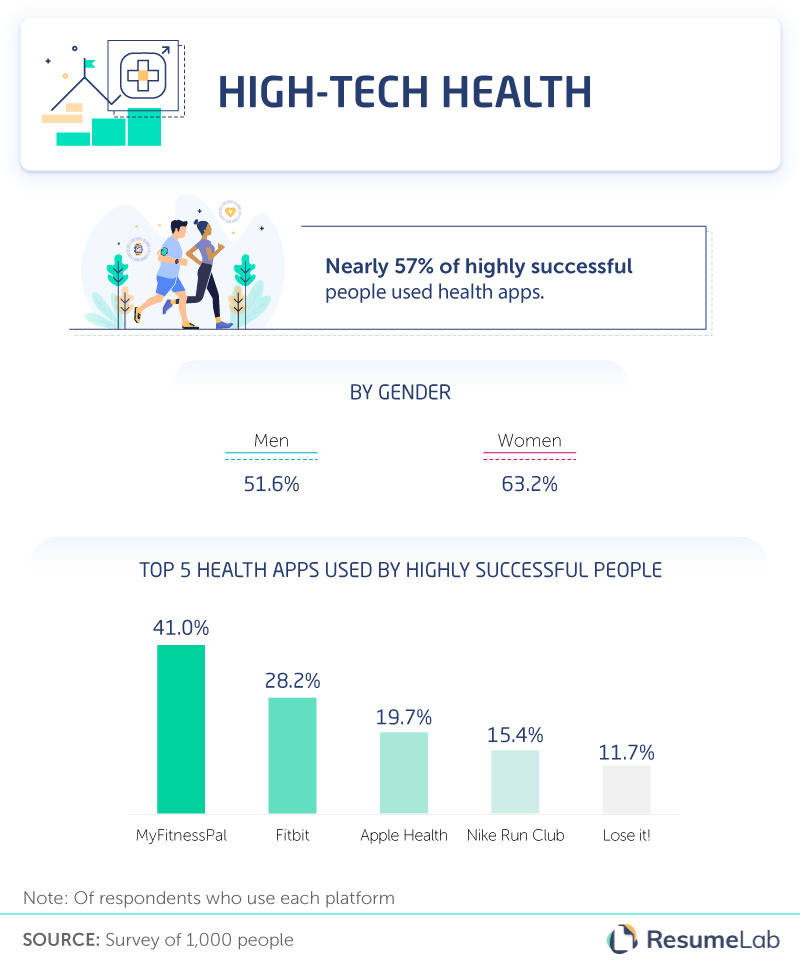 Research shows more than 3 in 4 wealthy people commit to working out at least 30 minutes every day, and highly successful people polled may have similar commitments to their physical health. Nearly 57% of people who self-identified as being highly successful acknowledged using health apps, including 63% of women and almost 52% of men. Physical fitness ranked higher than income (and even mental wellness) when it came to defining success, and that priority extended to their personal technology.

There’s no escaping technology, but how we interact with our devices could say something about our success, including how accomplished we feel about our physical health, family, and income. Like managing finances and traveling, highly successful people were more likely to use laptops, iPhones, and Alexa-activated devices. Similarly, Facebook was the most common social media platform used by highly successful respondents, in addition to health applications like MyFitnessPal.

At ResumeLab, we’re committed to helping you put your best foot forward on day one. Like the art of balancing tech habits, there’s a science behind truly great resumes and cover letters. Content, formatting, style, and language can make all the difference, and our experts at ResumeLab will make recruiters want to hire you with their data-backed strategies and experience. Want to change your resume game for the better? Visit us at ResumeLab.com to learn more.

For this project, we surveyed 1,000 people via Amazon’s Mechanical Turk. Respondents were 52.1% male and 47.9% female. The average age of our sample was 36 with a standard deviation of 11. To ensure the accuracy of our data, an attention-check question was employed in the middle of the survey. Those who failed to correctly answer this question were ejected from the study.

As with most survey results, the data we collected rely on self-reporting. This means that respondents may have encountered issues relating to attribution, exaggeration, telescoping, and recency. Since “success” is a subjective term, we didn’t have an objective measurement for it and relied solely on respondents’ definitions of success and their appraisal of success in several life areas.

Jeff Altman, The Big Game Hunter is a coach who worked as a recruiter for what seems like one hundred years. His work involves career coaching, all as well as executive job search coaching, job coaching, and interview coaching. He is the host of “No BS Job Search Advice Radio,” the #1 podcast in iTunes for job search with more than 12000 episodes.