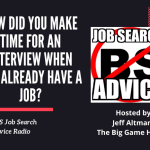 So, the question for today is, "how do you make time for an interview when you already have a job? Now, more and more people are doing phone interviews, more and more companies do phone interviews initially as part of their process. So I'm not going to address that. I think you all are pretty bright and can handle that without me.
I'm going to talk about the in person one because that there's really take the most amount of time. So, the first thing is consider the before 9:00 or after five interview. Can you do this where you get into work a little bit late, but the interview starts . . . Let's see normal starting time would be 9 . . . Let's say the interview starts at 7:45 or eight o'clock and you're arriving late. So, once you arrive late basically use the excuse of.
"the alarm didn't go off," or
"I forgot to set it last night."
" I it traffic on the way in"
" the subway was delayed"
"my bus was in an accident" stuff along those lines.
That allow you to explain your lateness that particular time.
Now, if you're dressing differently for the interview, you know, I want you to this to dress a little bit better a day or two before. Normally the day. Let's say two days before the day before you dress your normal way and then on the day of the interview you're dressing as in this special way that you would for an interview, and when people take note of it, just simply say, " we're going out tonight." or I'm going out tonight."
"So, where you going?" And just be prepared with an answer and the follow-up of if you ask the next day how it went, "we made a last minute change of plans." So you don't have to make an excuse about the interview..
You can also try the, "I wasn't feeling well," so,
"I had fever"
"I slept last night really well." Stuff along those lines that brings out the "oh, that's terrible. I feel bad for you," kind of response. You can also leave early with the "I'm not feeling well" excuse so that in this way you're able to get out a bit earlier.
You can also take the day off and say, " I'm going to work from home today and login remotely and then disappear. For someone who's not a native of the country that this is going to be listen to it, you might talk about going to immigration today. You can think about going out for a long lunch hour and simply saying, " I ran into someone who I haven't seen in five years. I spent a little extra time. Please excuse my being late coming back from lunch."
You know, taking time off isn't as difficult as people think it is. I'll just simply say if this is something that concerns you, practice your response to it because you don't want to come off as being nervous. nervous suggest that you're not telling the truth., But, if you smile and say "I just ran into someone I hadn't seen all this five years. I just needed to take time with them. So, excuse me for being late from lunch" or "coming in this morning a little late, but the likelihood of our getting together again or running into one another is so unusual since they live in" and then you mention that they live in another part of the country, and you wanted to see them.
Hope you found this helpful. Hope you have a great day. Take care.