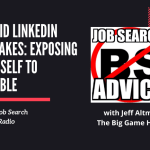 ANNOUNCEMENT: Today through Friday, you can download a free Kindle copy of “The Ultimate Job Interview Framework” on Amazon. PLEASE WRITE A FAVORABLE REVIEW OF THE BOOK. It helps others discover it.

Today, I thought I would do a show about stupid LinkedIn mistakes, and putting yourself in the position of getting into trouble unnecessarily.
How do you do that? Number one is you don't set privacy settings in such a way as that you can not contact everyone that you're connected with. Because on LinkedIn, you're probably connected to some people that you work with. And you're probably connected some people who you used to work with, who are still in touch with people that you do work with.
So not changing privacy settings in such a way that you don't share with everyone that you're connected with that you're making changes to your profile, gets you into trouble.
The simplest way to do that is if you go to settings and privacy. Actually, first click on the picture of yourself along the black ribbon going to settings and privacy, then there's an option there that allows you to change the settings in such a ways that you don't notify all your connections. Do that is the first thing.
Then, from there, understand that you don't want to necessarily put your work email or phone number into your profile; you always want to have a personal one there. Again, this video is for people who are currently working. If you are not working, no issues whatsoever because your phone number and email address there. But if you are working, you don't want to have professional ones there that allow you to be getting calls and emails at the office. Put your mobile number there. Put your Personal email. That's not an issue.
You also don't want to be in a situation where you're using your firm's technology, their computers, their smartphones, their printers and stuff along those lines, because those can be easily monitored. You don't want to share on social media, and, particularly on LinkedIn, that you're out there looking.
Now you're part of groups "hey, I'm looking for a job. And if you guys know about a job . . . " They're just dumb stuff that people do.
Also, trusting someone at the office with the fact that you're looking. I used to work as a headhunter. And so many people got into trouble because that person saw it as an opportunity to ingratiate themselves with their boss or manager and allow them to know so that, they could be seen as loyal.
You don't announce the fact that you're looking for a job in a LinkedIn update. You don't announce your search in the headline area of your LinkedIn profile.
I'll simply say the idea of putting out there that you're looking for a job in a public way, if you're currently working can get you into hotwater because you don't know who sees what. You don't have control of the algorithms that reveal stuff to viewers. And, as such, it's one thing to do it in a personal conversation, email, a text, a private message. It's another thing to put it out publicly.