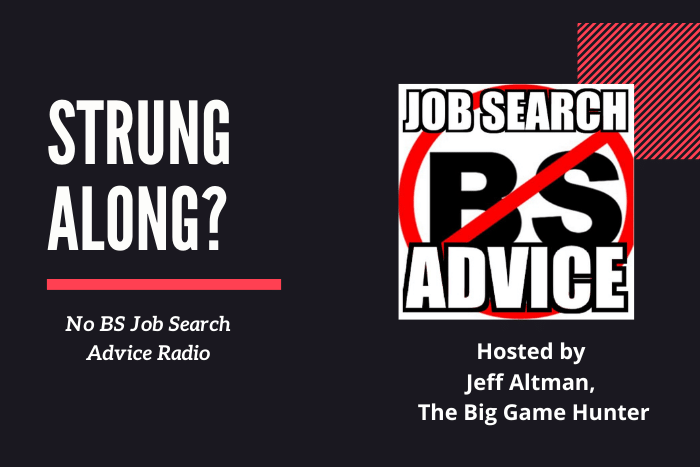 EP 813 Jeff Altman, The Big Game Hunter offers a simple but elegant tactic for moving thing along and not letting yourself being strung along.

I reminded of this because of the situation I had years ago with someone who I had interviewing with 1 of the investment banks. 19 interviews. I made a mistake in how I handled it. 19 people interview this guy over at least 7 or 8 occasions. Here's what I should've done and what I didn't do.

Somewhere along the 3rd or 4th interview I should've asked this question, "how much longer do you think this process is going to go on?"

"Gee. We don't really know. There are a lot of people who want to meet him that are represented by different constituencies within the firm. They all need to sign off."

I should've then continued by saying, "Well, he has other things going on and is going to be making a decision in the next 2 weeks. Do you think you can get things together in 2 weeks time. Otherwise, I'm sure he will withdraw his candidacy."

I just want to encourage you that if you are in a situation where you going on lots and lots of interviews (I'm not talking about 2 or 3. I'm talking about, you are at number 4 or number 5 and nothing is really moving and they are not really indicating when things are going to be over), reach out to them after that interview and tell them,"C could you give me an idea how much longer this process is going to go on." Then, sit there quietly and listen to the answer.

If it is appropriate, then you turn and say, "I have a few other things in the hopper right now that are pretty close to fruition. I expect to have an offer on the next 2 weeks. Do you think you could be done in that amount of time or should we just pull the plug on this, which one another well and move on."

It's very graceful because you are giving them a timeline. You are not saying it in a demanding way with an ultimatum. You are just very politely saying, "I have my life to live. You have yours. We each have decisions to make and I am going to be doing minor the next 2 weeks. Do you think you can do yours in the amount of time."

If they don't like it, that basically indicates that this could go on forever.