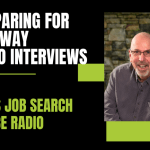 EP 1928 There are specific steps to one-way video interview preparation. Let me walk you through the steps.

More and more organizations are switching to initial screening through one way video interviews where you provided questions in advance. Then from there, you're speaking to a camera and answering questions. Years ago, I interviewed someone I want to say Chip Luman from HireVue. HireVue is a firm and I haven't spoken to him in years but the idea was that there are analytics that they have created that allow them to recognize people with similar answers like ones that they've hired before, get a sense of their performance and their predictive analytics that they work with is part of your answer.
For you understand that from an employer perspective, firms are concerned about saving time and candidate fraud. There's a hysterical video of someone being interviewed by video, and it wasn't them speaking. And it's very clear that they're trying to lip sync to what the answer is, but it's kind of like the old Hercules movies from the 1950s. You know, they were done in Italian and dubbed, and the mouths didn't match up. And that's kind of the way this looks.
So, in preparation for a one way video interview, I want to remind you about a couple things. Number one is they're going to send the instructions to you in advance about what their expectations are. Follow the instructions. They're telling you what they're looking for from you. Okay?
From there, then we're also going to tell you when you have to complete the video interview by. Doing it and coming in two days late is ridiculous. Why would you ever put yourself in that situation? You're not going to be considered; they're going to think well, they're just going to delete any response that you have.
There's also employer login information so that you have access to where they want you to to respond to. Have that nearby and, of course, you know, prepare in advance. They may send questions in advance . . . like, I remember HireVue . . . Chip was telling me that they send the questions out in advance. Rehearse your answers!
Seriously, why would you just wing it at the interview if they're giving you a take home exam? If they're not sending the questions in advance, you want to have certain reminder notes around the monitor that you're working with, in order to encourage you to hit key points in your background that relate to your understanding of the role. So, practice becomes important. Whether you have the questions in advance or not, practice how you answer.
Also, think in terms of the backdrop. For example, if you've watched any of my videos before, you know, this is what you see almost all the time, except in the early years where I live in a different place. So, make sure what's behind you looks well and of course, dress well. They're not going to see more than a certain part of you like maybe from here up on a monitor, but dress the part. Look well professionally.

In presenting yourself, your answers are going to be time limited. So, in practicing your answers, make sure that you hit the talking points for the amount of time that they give you.
Lastly, look at the camera. If you're looking off this way and answering questions, you know, it looks odd to them. And it doesn't look as though you're confident in your presentation. Recognize that all these variables have an impact on their perception of you. Your answers are only part of what a firm looks for. As I've said many times, competence, self confidence, character, chemistry, maybe a little bit of charisma, all of which represents someone who inspires confidence that you are the solution to what they need.
That's what they're really looking for. They want someone who they can believe it.By the way, I was just reminded of something and that's lighting.
For those of us with glasses. Sometimes it's necessary to tilt our heads forward. So as to avoid glare. And I just want to remind you that because, again, eyes are important, it makes a connection. And right now I'm not looking at the camera, but it does look like I'm looking directly at you and I'm tilting my head forward. So, again, with glasses, you want to avoid glare.