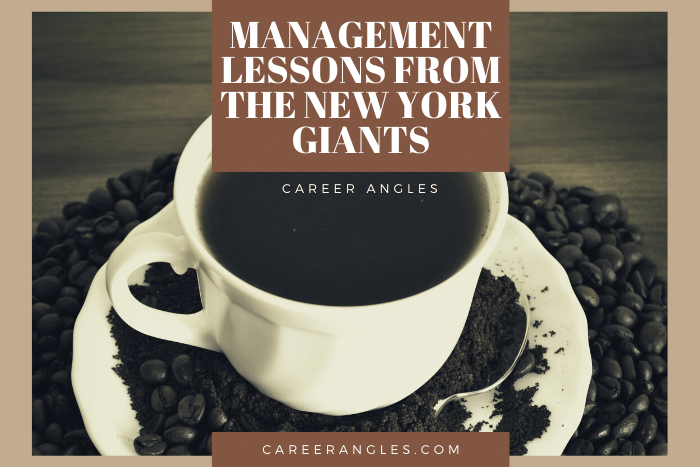 As the leader of the business, do you step in and try to help?

Most people would say, “Yes,” and that is what New York Giants head coach Joe Judge did. His offense of line was not performing well so he got involved and start to work with one of the players. The offensive line coach, Marc Columbo acted as if his power was being usurped. As soon as the head coach became involved, the offense of wine start to perform better.

Was that the reason or was it because the line just started to gel at that time. We don’t know and no one says. What we do know is that the head coach decided to hire someone to assist that coach so that he didn’t have to.

As the story goes, the line coach was angry and started to yell at his boss. This was not the first time it had occurred. Thus, one day, the line coach was heading for his car when he was approached by Giants security, brought the human resources and fired.

Let’s deconstruct some of the things the Giants did.

They hired someone with a great reputation and track record of success for the role.

They were not getting the results that they wanted.

They try to help this person but were met with opposition.

The head coach attempted to step out of it and hired someone to assist the coach.

This is what’s publicly known. We don’t know if there is more to this that hasn’t been shared yet. If these are the steps that actually occurred and taken it would seem like there was an effort to focus on the results and less on the feelings of the person who is not getting the results from the players that was wanted.

Ego got in the way and resulted in a situation where a subordinate challenged his boss and was fired.

How would you respond to being challenged?

What would the effect be on your staff if you are yell that publicly by one of the assistant managers in your office.

What would you do to change the dynamic?

Could you change the dynamic?

From the beginning, the head coach at stressed, “team first.” How would you respond if a failing subordinate made it about him or herself instead of about the organization?

Would you fire them if they were publicly insubordinate?

These are the questions from this episode that I think are useful for you as a manager or leader to reflect upon. I know in organizations I’ve run or been a participant in, I or we faced similar situations. I know in one case with the firm I owned, I had a private conversation with the subordinate to see if I get her to be more of a team player. When that didn’t work, when they start to talk about me behind my back, I fired them.

In an organization that I worked in where the inmates ran the asylum, chaos prevailed. Leadership like some of the results that they got but staff didn’t. Old-timers within the firm stayed. Newer employees all left. They built nothing and eventually were taken over by another firm, rescued from their financial demise.

There is no simple answer.

Jeff Altman, The Big Game Hunter is a career and leadership coach who worked as a recruiter for more than 40 years. He is the host of “No BS Job Search Advice Radio,” the #1 podcast in iTunes for job search with more than 2000 episodes, and is