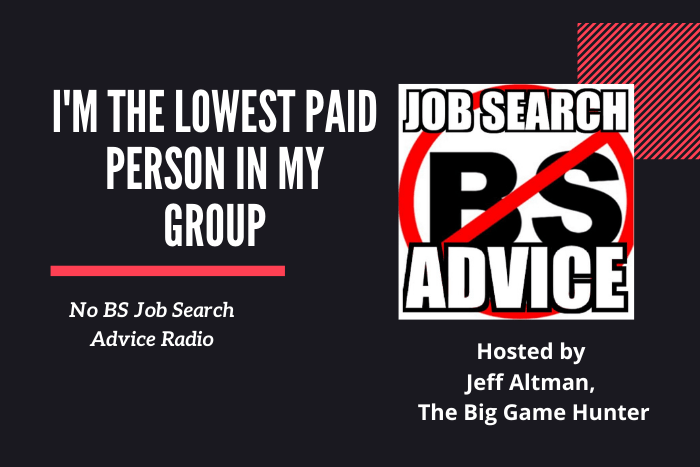 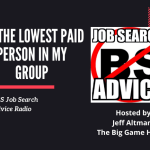 EP 2056  A person’s question about dealing with being underpaid was answered in a manner that seemed like nonsense. What should you do?

Support for today’s show comes from AppJobs, a freelance and gig job for people who are not technical or doing office work, and from Great Resumes FAST, a premium resume writing service for professionals. 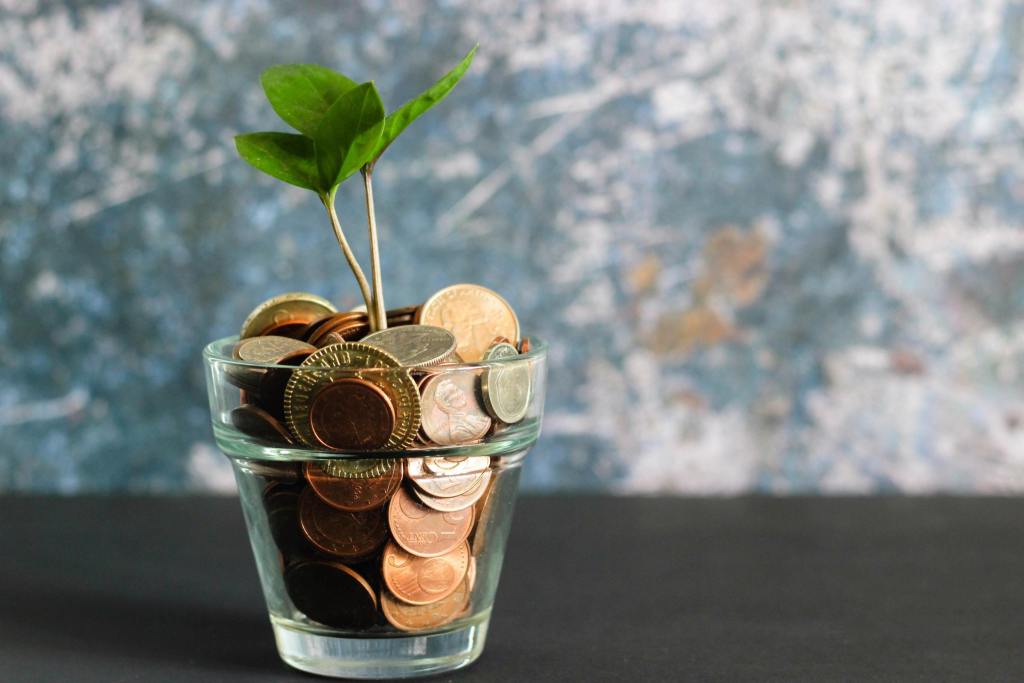 I'm Jeff Altman, The Big Game Hunter. I coach people. I do executive job search and career coaching.I'm the head coach for JobSearchCoachingHQ. com and NoBSCoachingAdvice.com. I have a podcast name No BS Job Search Advice.
I was listening to a Harvard Business Review podcast this morning, where someone outlined a situation that they're in. I thought it's a good lesson for many of you. I'll start by saying the situation involves someone who's a good level performer. We don't know if they're a high level performer because frankly, everyone describes themselves as a high achiever. So I don't know if that's true or not. Let's work with the assumption that they are.
And they've gotten transferred yet again. His last organization that he was working in and, it's within the same firm, just to be clear, the last organization he was working in, he was promised a large increase by his boss that never came. Now, he gets transferred to a new organization, new manager, new responsibilities, more responsibilities. And he goes, "Hey, look, I was promised a raise previously. Could you help me here?"
His new boss looks at him, does some review, comes back to him and says, "You are at the very bottom in this organization from a financial standpoint. I think after the midpoint, we'd have to give you a $30,000 raise,"
Duh!
So, he's now in a situation where his boss then continues on by telling him and we can't review salary for another six months. The result winds up being at that time, you're only going to get a modest raise. So he's left in a bind. What do you do?
Now, HBR starts talking about, you know, you know, you need to find an advocate from the previous organization that, collectively, they and the new boss (and the new boss has no reason to advocate for him because, after all, the person hasn't worked for him at all), they all get together and advocate for a bigger raise.
Who are you kidding? Nice story, but it sounds like an HR piece of crap because no one is going to turn around an organization that institutionally constructs things that they won't review or remedy a situation like this. They're operating as a bureaucracy. So nice advice, HBR, but I'll just simply say, the reality to this situation is you've either got to take it or leave it. Take it from the standpoint of put up with it, and, you know, hold them hostage at some point. But the reality is, if you really want to stay, you're going to have to go.
Huh?
Yes, you're going to have to leave and get an offer at a more reasonable level for yourself and then circle back to them for a counteroffer at the time of your departure and say, "Look, I really don't want to go but the reality is, you're underpaying me. I know it's in your interest, but I'm not the wealthiest person in the country, you know. So my compensation is important to me, I need a job where I'm being treated fairly. And right now, I'm being undervalued dramatically . . . $30,000 . . . to get to the midpoint."
Now, I want to be clear, if you go to another organization, that can't be your story, you know, when you're interviewing, you have to talk about an organization and talk career stuff but play for the counteroffer here, because your firm is going to do nothing until a gun is put to their head. Now, I also want to be clear, there's sometimes an impact of doing that. The impact can be you can be passed over at a later date.
So, that's the dance you can do and it just allows you to advocate for yourself. You may need to leave because they may not make the counter because, in their mind, you're worth that lower salary. So, this is the way to play it out. And it is really, and not the HBR version of this, the practical way to do it.
You look to leave, you get your offer at a higher level, you circle back to your employer when you give notice and say, "Hey, look, I'd prefer not going but I also need to be compensated at a level that's fair for me." Get a 20 grand raise from the next firm, circle back to your existing organization, and then, from there, very simply play for the counteroffer.
So, ,I'm Jeff Altman, I hope you found this helpful. If you're interested in my coaching you from a career standpoint, reach out to me through LinkedIn at linkedin.com/in/TheBigGameHunter. Mention that you saw the video because I just like knowing I'm helping some folks. Once we're connected, message me that you're interested in coaching. I'd love to help.
Also want to say if you just have a couple of questions, what you can do is contact me through either the Magnifi app, that's M-A-G-N-F-I that's iOS online or through prestoexperts. com where I'm a job search and career coaching expert. I'd be happy to answer your questions. I don't work for free, obviously. I'm going to charge for those services.
Hope you have a great day. Take care 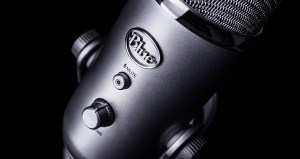 Photo by Micheile Henderson on Unsplash