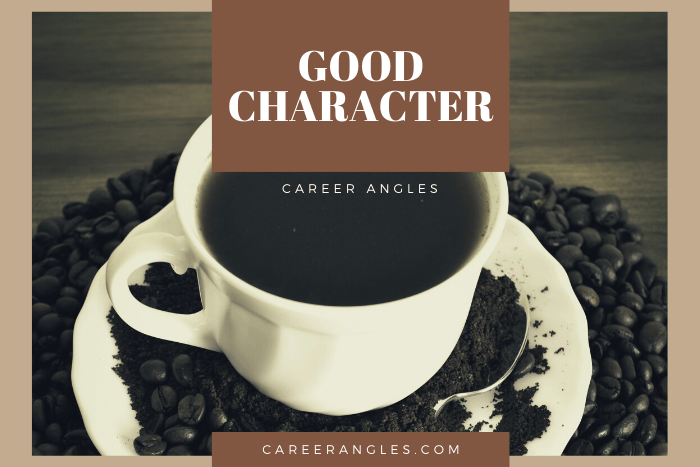 “The mental and moral qualities distinctive to an individual.”

“the aggregate of features and traits that form the individual nature of some person or thing.

one such feature or trait; characteristic.

I worked in offices where the owner of the firm conducted himself in a way that in retrospect he was not proud of.

I was oblivious to the signals of his affair and how his girlfriend was always advantaged in every decision. I didn’t notice the obvious because I was so focused on what was directly in front of me. It wasn’t until I received a phone call from an old friend who is a reporter asking me about details prior to her wire service running a story that I put everything together for the first time. That’s how oblivious I was.

It’s interesting to me that we look at the definition of character, there’s a little bit of a disconnect between how we tend to think about it and what the real definition is.

In both definitions, the term is defined as being the sum of the qualities distinctive to a person.

I know are all flawed at times and that we make mistakes. Few of us make mistakes that would cause us to be judged as immoral in the workplace. I’ve been in those offices where that occurred and then was exposed to the public. It was awful.

Almost everyone I know was raised to conduct themselves ethically.

We make mistakes. We suffer consequences. So does the firm we’re associated with.

There’s an old manage — is this a decision that if your parents read about the consequences in the newspaper would make them feel ashamed.

It’s probably one of the simplest ways to figure out whether or not you are acting with good character.

Jeff Altman, The Big Game Hunter is a career and leadership coach who worked as a recruiter for more than 40 years. He is the host of “No BS Job Search Advice Radio,” the #1 podcast in iTunes for job search with more than 1900 episodes, and is a