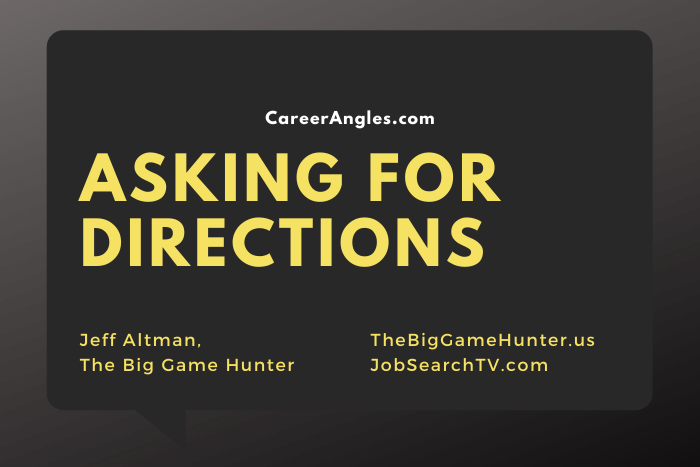 One of the great stereotypes of the 20th century was that men don’t ask for directions when they are lost. How many arguments occurred in the car between a couple, trying to figure out where the next turn was and he not been willing to pull into a gas station to ask the attendant?

One of the great stereotypes of the 20th century was that men don’t ask for directions when they are lost. How many arguments occurred in the car between a couple, trying to figure out where the next turn was and he not been willing to pull into a gas station to ask the attendant?

It must’ve been a woman who came up with the idea for GPS and, if not, certainly the GPS app on a mobile phone. How many relationships were saved with those inventions?

Difficulty asking for help is not unique to men. Women have the same problem, too. The fact is, both genders seem to find it preferable to figure things out on their own without help or assistance, even though it is harder, takes longer, and is often met with failures along the way.

We all know that asking for help from someone who actually knows what they are talking about is a useful, though underutilized shortcut. Why is it so damn hard to ask for help?

Great athletes will have coaches, whether they are on a team or individual sports. We all know that Michael Jordan was the greatest basketball player of his era, if not of all time. But we forget that it took many years until he won his 1st championship. It took a special coach who could see his greatness and persuade him that he needed to play less and do it within a system in order to be a champion. After leading Jordan, Pippin, and the Bulls to 6 NBA titles, Phil Jackson moved on to the Los Angeles Lakers where he led Kobe Bryant to 5 NBA rings. A great coach made a difference.

Coaching doesn’t only work in sports. It is effective in the entertainment field and in business, as well. If I said the name Seth Riggs to you, most of you who read this would probably go, “Who?” I’m sure you would know a few of the people that he coached:

What did these men and women know that most of us struggle with?

I know doing research on the web and other places is where I fell short when I was trying to lose weight. I kept trying to follow one diet or another over the course of 2 years yet all that was happening was that I would lose no more than 5 pounds before it would start to reappear on my body. It was incredibly frustrating to wake up one day and see myself way more than I ever had in my life.

One day, I decided to take the advice I give to others and hire a coach. Between diet and hard exercise, I have lost 15 pounds in less than 2 months and feel fabulous. I couldn’t figure it out without her plus her experience allowed me to “outsource” my thinking to her and trust that I would get results.

Whether you are job hunting, having trouble hiring staff, having business problems that you cannot figure out, or struggling with personal relationship problems, good coaching can make a difference.

Yes, you will spend some money, but isn’t it worth it to you to get some help in an area where your expertise is, shall we say, imperfect?

Find and hire a coach to help you achieve your goals and be the woman or man you want to be.

Jeff Altman, The Big Game Hunter is a career and leadership coach who worked as a recruiter for more than 40 years. He is the host of “No BS Job Search Advice Radio,” the #1 podcast in iTunes for job search with more than 2200 episodes, and is a former member of The Forbes Coaches Council.