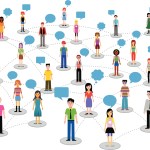 EP 1781 Everyone knows that networking outperforms recruiters and job ads as a way to find work by better than 2:1. Here, I offer 3 ways to up your game.

I thought, today, I will give you a couple of suggestions about how to up your networking game. After all, the statistics are very clear. Networking fills 70% of all positions. Even more if you are a senior professional. I see numbers as high as 90 and 95% of senior positions are filled as a result of networking. I don't know this next statistic for the seniors, but the general numbers 70% is filled as a result of networking and 70% of the 70% (or 49% of the total) are filled as a result of introductions the people that you don't know who network does no. I’m sure that's even higher for more senior professionals. So, what can you do? How can you improve your networking? I thought I would offer you three ways.

Number one. Instead of going to a staff level individual, instead of going to HR, I want to encourage you to start the top of the function that you are trying to find a job for and look for some advice. I will speak of myself, when I got into recruiting back in thee Stone Ages, they said never call HR. they said always contact the head of technology for the organization (In those days, to give you an idea how long ago this was, there was a VP level position, occasionally, it was an SVP. There are no C-level in technology. That’s how long ago this was).

You start the most senior level individual and work down, instead of trying to work your way up. So, you don't pull the financial analyst if you're looking for a leadership role. You're looking for the head of the function. That's number one.

Number two. This is a fun one for networking events. You know how you you're looking for an opportunity to talk a little bit and this is one of the ones that I find enjoyable. That’s the one where you’re invited to tell your story about how you got into your field. So again, I will use myself as an example.

When I got into recruiting, again, back in The Stone Ages, I was a political kid. I used to do advance for presidential candidates. The idea was that, at particular point, I decided to get out politics and look for a role. I didn't know what to do. I just knew I had a cushy situation at a government agency where I really didn't have to do any work. As a matter of fact, I was working nights and basically sleeping because there was no one there to police what I was doing. I was 20 years old. So, I will just simply say I hope that doesn't disappoint you about me. I was 20 and didn’t know any better.

Eventually, I start the answer job ads and I saw one that said, “Management Trainee. Inexperienced Preferred.” I almost didn't apply because it asked for “inexperienced,” and I had “no experience.” So, you can create a fun story where you can laugh about yourself as a gateway to a conversation with folks at a networking event by talking about how you got into your field. You can start by asking them, ”How did you wind up getting into . . . (whatever it is)? That becomes the way that they can talk first and, usually, they'll reciprocate by saying, “how did you do it?” So, it becomes a fun conversation starter.

The third one, I think, is the best of the three. If you get an email from a recruiter – – corporate or agency makes no difference – – you get an inMail, you get an email instead of replying with an email, call them. Call them as soon as you get it and start the conversation, “hey! I just got an email from you about a position. Thought I would call instead of just simply responding by email.” it is probably fresh in their mind, even if it's a bulk email that they had sent out or a bulk inMail through LinkedIn Recruiter. You are going to stand out from all the other replies.

So, you do it with a smile on your face. Sound happy. Don't sound depressed. Don't sound like it was an inconvenience. Just simply say, “I got your email about this position. Thought I would give you call and talk with you about my role and about my background. Do you have five minutes now for a preliminary conversation? Obviously, I’ll send the resume over to you if you if you think it's worthwhile . . . “But just start the conversation where they can hear your energy and passion and excitement and go from there.