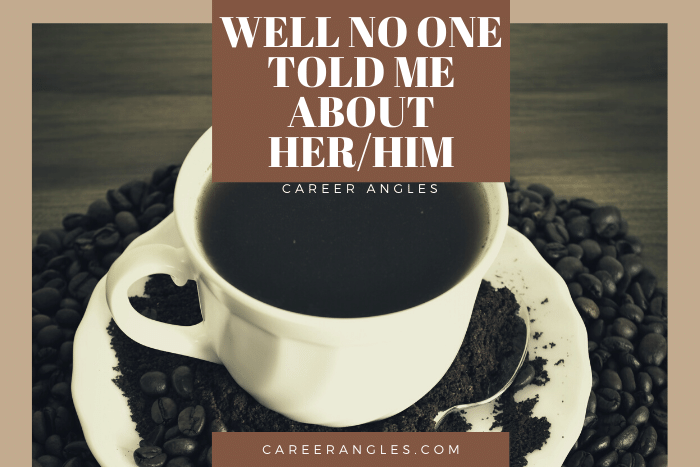 Performed by The Zombies, “She’s Not There”

Written as a lament about not being warned about a girl with a narcissistic personality who is able to disguise her mental illness by presenting herself as normal at the beginning of the relationship and then slowly revealing the truth, so it is with many employers/hiring managers to do much the same thing.

Having worked for someone like this before, I can attest to the seductive qualities that they have. Smart. Capable. Presenting successfully. I ignored the recommendations of people I knew who try to head me off from going to work for this person.

Both the mania and the narcissism displayed became terrifying. Phone calls were listened in on. Emails were read. The smile on their face had the daggers that were to come. I experienced multiple years of hell and, like others a try to head me off, when I left, I tried to head others off but they, too, were fooled as I was. That’s how good the seduction is.

One thing I encourage job hunters to do prior to joining an organization is a little bit of reconnaissance about the immediate manager you be going to work for. After all, they have a history and usually former employees who can tell you what it’s really like working for them.

After all, the probability is that someone left this job before you. Especially now, newly created positions rarely exist. It is a replacement for someone. Don’t ask them why the person left. Ask your future peer why it happened. Read between the lines between what is said and not said. After all, when they say, “they left for a better position,” what they really saying is, “the job sucks and they finally got out.” Isn’t that your story? You’re trying to find a better position than the one that you have. Someone else is going to say the same thing about your job.

But narcissism runs deeper just simply a job that sucks. It deals with the personality disorder of the hiring manager. When you listen to the people warning you, you have to dig deeper to see whether is just a complaint of a disgruntled former employee or a sincere warning about a disturbed individual.

Remember, they present as normal but aren’t. When you’re on board and they have one of those episodes where you see someone become the target for their criticism and want to keep your head down and hide for fear that you will be the next one, that is your moment of truth for accepting that you’re working for someone who has a disorder.

I know I was able to hide for a while but I reached my breaking point, too. I won’t say that this specific story because people like this love to sue. I first watched him try to provoke a top salesperson in the office who he refused to pay his commissions into hitting him so that he wouldn’t have to pay him what was due.

I watched him refuse to pay someone a contest award because the winner didn’t generate as much as he thought he should have. A completely arbitrary decision that cost that person dearly. But he didn’t care. It was all about him.

Crazy stuff, but that’s how it happens.

Until one day you wake up and realize that the person you’re working for is like an abusive spouse. They always promise to do better and never do. You’ve got to leave as I did.

But don’t expect it to go easily. Remember, this person tried to get someone to hit them to avoid paying them what they were entitled to be paid.

But unlike the song, we are warned. We have to listen to the warning and heed it.