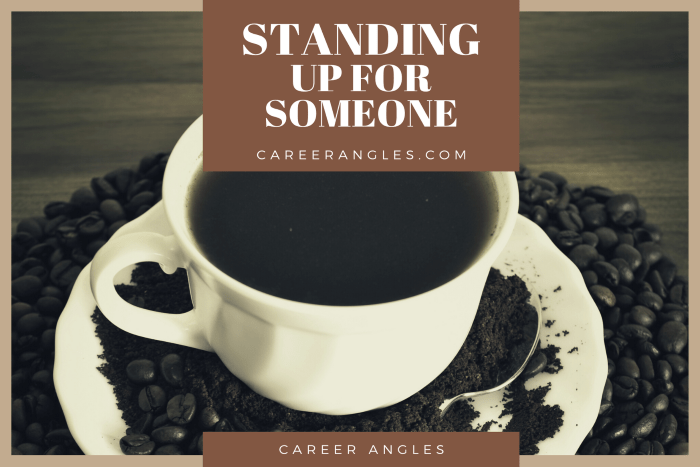 Standing Up For Someone | Career Angles

“The truth is the kindest thing we can give folks in the end.”

Injustice doesn’t just simply occur in the world at large. It occurs in the workplace, as well.

Sometimes you just need to stand up and make your voice heard.

I did that once after listening to the owner of the firm I work for make a racist remark in front of his black office manager that hurt her badly. I wound up being a witness in a lawsuit to talk about what I had seen and heard.

It was difficult to be in that spot but it was the right thing to do.

Standing up for someone doesn’t need to be as dramatic or traumatic as what I did.

It may be defending someone from bullying.

In maybe advocating for direct conversations between two people who are taking shots at one another and, maybe, offering to play mediator between the two.

It may be putting yourself in the role of someone who’s listening and asking questions that shift someone’s mind from hatred to tolerance.

Standing up for someone isn’t about being a hero, although sometimes it is.

Standing up for someone is about doing the right thing.

We like to think of ourselves in that way but, too often, failed to display the bravery necessary.

There are more times to display bravery at work than you initially recognize.

Bravery. Courage. Honorable action. Whatever you want to call it, speak up.