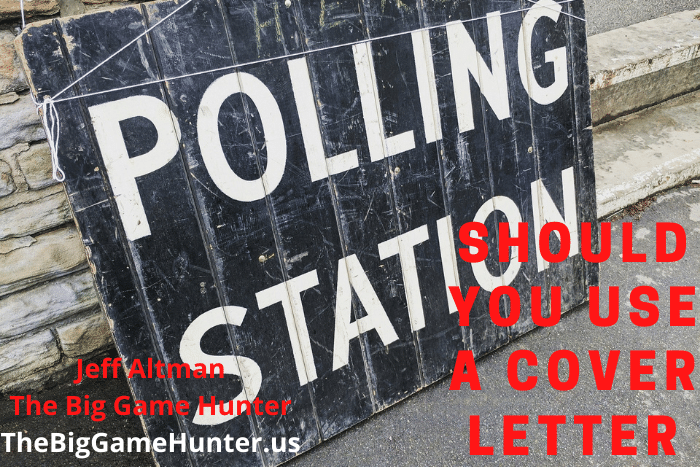 When I started in recruiting, which feels like 100 years ago, there was no Internet; there was no Microsoft Office or Adobe Acrobat. When a secretary made a mistake (and there were secretaries back then), they would correct it with his gloppy product called Liquid Paper invented by a former secretary who was fired for her intervention.

Moving ahead to today, cover letters seem anachronistic. After all, who needs a cover letter when you can tweak your resume to demonstrate a fit for the job. Although some hiring managers like them because they show attention to detail and, when used well, can reveal personality, I know from experience that many don’t want them anymore.

I decided to use a poll on LinkedIn to see what people thought of them in today’s world. I asked a very simple question:

If you interview people or are involved with hiring, do you want to receive a cover letter with the resume?

I offered three choices of how to respond to the question:

The question I asked was simple, but the answer answers I invited were subtle.

Here are the results:

I suspect many of the people who don’t care about cover letters don’t see their value because people submit indistinguishable ones that do little to advance their candidacy.

“At the end of the day, anything a candidate can do to set themselves apart helps especially in openings that get a ton of applicants. I do agree that most hiring managers couldn’t care less (unless they want to see someone’s writing skills) BUT many recruiters find them helpful in some cases and in ALL cases, it shows that the applicant took some additional efforts towards really wanting the opportunity.”

Because their cover letter will tell me if they took the time to understand the role, or are just blindly submitting resumes. It’s a quick way to weed through candidates

“I don’t like lengthy cover letters that are canned. What I do like is a quick, relevant note that showcases writing skills, enthusiasm, and relevancy to the role in question.”

When I had to look at job applicants, a well-written cover letter connected the dots. Too often, a resume can obscure the candidate’s qualifications.

“When I was involved in recruiting for a program, I would definitely view the cover letter. (A) resume showed me the candidate was qualified (so were most other candidates) the cover letter is what set them apart.”

I’m a recruiter: cover letters are largely irrelevant if the resume accompanying it doesn’t clearly show that the job seeker is a strong match.

“If recruiters/hiring managers are only taking 6 seconds to skim a resume, are any of them really looking at cover letters?”

Reading all the comments, I get to the point that the requirement of a Cover letter is subjective. It depends on the requirements of the job, the approach of the hiring manager.

If it’s a “T” letter quick and dirty it could tell u that the person has credentials for the job.

Let me summarize for you.

Since no one knows who wants or doesn’t want to receive a cover letter, we must use them.

I know from experience (after all, I worked in search for a long time), no one will open up a separate attachment to read want. It needs to be in the body of an email.

The last comment I included suggested using a “T” letter. The idea behind that is that you demonstrate your fit using a simple table. Flush left, you list the individual requirements of the position. Flush right, you list how long and how recently you have done that particular function or skill. It makes the skills requirement obvious.

Then, as one person pointed out, it has to match up with the resume you submit. If it isn’t in the resume, they don’t believe you have the expertise. I’ll also add that your LinkedIn profile needs to be congruent with what you’re saying in the resume.

Lastly, there is a desire for something that demonstrates you’re not another “clone.” Your cover letter allows you to stand out from the enormous list of emails in people’s inboxes. I want to offer suggestions about how to do that. They may not fit you or the role.

However, cover emails (since they no longer cover written documents) offer an “at a glance” method of demonstrating the fit and showing your personality that helps you stand out from the pack.

Connect with me on LinkedIn www.inkedin.com/in/thebiggamehunter Mention you listen to the podcast or watch my