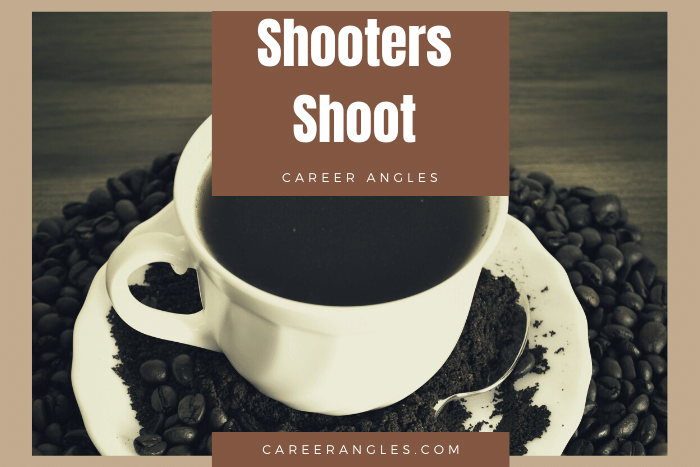 I was up early this morning and turned on ESPN. Steph Curry was being interviewed after the game where he started the game missing a lot of shots but continued

shooting and wound up with 30 points.

After the interview, the anchor commented, “that’s the old saying — shooters shoot.”

And then there’s the story of John Starks who is the shooting guard for the New York Knicks. In game seven against the Houston Rockets, Starks missed 16 of his 18 shots including 11 from three-point range. His coach, the great Pat Riley, said much the same thing — shooters shoot.

You may lose a game during the season when you have a John Starks moment. At those times, you can brush it off and go on to the next game, project or situation.

There are times like a game seven where you lose everything with this attitude.

As a leader, as a manager, or, in Riley’s case, as a coach, you need to have the wisdom to switch plans and go do something else when this happens.

And sometimes it will happen.

Starks was a very good player who had a great season. He plays three more seasons with the next before starting to bounce around the league. He was someone who no one expected anything of.

He bounced around collegiate ball moving from school to school. Several of the problems were of his doing. Eventually, he was recruited into a program where he had the opportunity to play more.

He was undrafted and fought his way onto the roster with Golden State averaging four points per game. He fought his way onto a Knicks roster that was composed of one star player, Patrick Ewing, and four grinders. He was the shooter who complemented Ewing.

His performance in the NBA finals is referred to as the greatest child job in NBA history.

His coach believed that shooters shoot and although Riley never got the team back to the NBA finals after that appearance, he went on to coaching Miami and eventually become the general manager. His teams won titles because of his hard-nosed attitude and the support of players.

Players like Dwayne Wade, Lebron James, Chris Bosh, and Alonzo Mourning. All great players. All backed up by Riley.

Shooters shoot is a metaphor for doing what you do best, even though you might fail anyway.

As a leader or as a manager, do you encourage your people to keep doing what they do best, even when they’re not getting the results you’re used to getting from them?

As a member of staff, do you keep shooting/trying even when you’re not getting the results that you’re used to getting?

You may have a John Starks moment.

You may have a Steph Curry moment.

There is no chance of having a Steph Curry moment unless you keep shooting.

BS Job Search Advice Radio,” the #1 podcast in iTunes for job search with more than 2000 episodes. He also hosts Job Search TV on YouTube, Amazon and Roku, as well as on BingeNetworks.tv for Apple TV and 90+ smartsets.

Photo by Wallace Chuck from Pexels