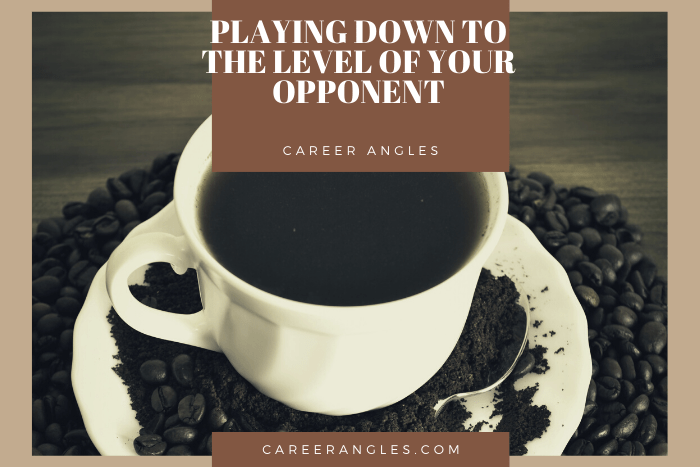 Most sports are both mental and physical.

One of the ways that sports shows up as mental is when a terrific team plays a bad team. I is dollars and let the race swing race correctly written and when you the second one works than he did this at work it depends on what goes around and you state where it says you winning something multicolored you

Often, the terrific team will take it for granted that they will beat the bad team. As a result, they don’t play at their best that day. Their focus is a little bit off. Their execution is not perfect.

Bad teams often play harder because they don’t want to be embarrassed.

This is why bad teams will sometimes upset a very good one and why these are referred to as “trap games,” on the schedule of the superior team.

There a trap because mentally the good team is not up to snuff for this game. They look at the schedule and think to themselves, “this game is a W for us (a win for us).” They act like they can phone it in and they will win.

Too often, firms hire superior talent and bring them into organizations where the culture is one of mediocrity, expecting that the higher per formal will bring up the standards of the others.

Instead, the superior performer is acculturated into the environment.

They don’t perform as well as they did previously because they learn the environment doesn’t support it, even though they have been told that that is exactly what is demanded of them.

Without the institutional authority to demand and make changes (including turning over staff), a manager will find it difficult to have success with his team at work, just like a sports manager will have difficulty winning with the roster that is used to losing.

It reminds me of the story of Moses and his leading the Jews out of Egypt. A trip that should’ve taken a short time took years because G-d decided that no one who had experienced slavery should enter into what we now call Israel. That’s because if they experienced hardship they would want to go back to what they previously knew, rather than deal with the hard times.

There’s a story about Michael Jordan when he was a rookie on the Chicago Bulls when he went looking for his teammates in a hotel and found them in a room during a drug party. When he saw what was going on, he decided to leave because he believed that the police came and raided the place, he would be as guilty as everyone else. He left.

His teammates one 27 of 82 games the previous season. Jordan had standards and wouldn’t compromise them. He wouldn’t play down to their level, nor succumb to the temptation of allowing himself to tolerate bad times a la the Moses story.

He wouldn’t go down to their level.

Going along with cause compromises that he would not make.

Performing at your best, whether at work, in sports or entertainment is a commitment.

Winners find a way to win. Losers have great explanations for why they didn’t win.

They make compromises instead of sacrifices.

The play down to the level of their opponent, rather than always being the best.