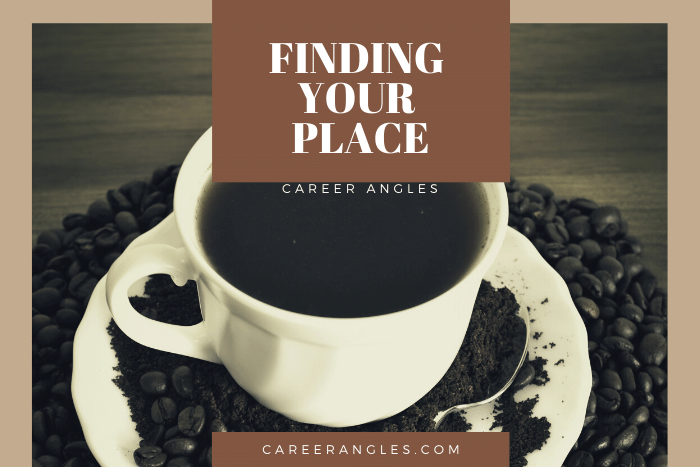 “All the world’s a stage,

And all the men and women merely players;

They have their exits and their entrances;

And one man in his time plays many parts,

His acts being seven ages.”

As Shakespeare points out, there are seven stages in our lives. We begin as babies, moved to the stage where we are winding schoolboys (or schoolgirls. Shakespeare only spoke of schoolboys), become lovers, soldiers, justices, begin the aging process and then exit the stage.

In Buddhism, the stages of life are spoken of as birth, aging, sickness, and death.

But that doesn’t deal with the question of finding “your place.”

“Your place” is defined differently by different people.

Then unattributed quote speaks to the idea that environments win. Thus if we go into environments where we have to sacrifice ourselves to conform to someone else’s expectation of how we should be, that is not our place.

Then, there is the example of being older in American culture. As an older individual, you get the message beginning in your 50s that you are not going to have a place at some point. As you become more expensive and employers have cheaper options available, you get pushed out the door, fewer companies interview you and even fewer are open to the idea of hiring you.

Generationally, you defined your life by your work and now it has been taken away from you. Your measure of being a man or a woman is withdrawn or just simply stripped away.

What do you do when your measure of being a man or a woman is taken away from you?

For many, the feeling of loss is overwhelming. They have nothing to attach to, no professional relationship to hold onto. They have been put out to pasture and ungracefully told, “Don’t bother us. Just go over there and die and leave us alone.”

I’ve seen this happen to my father who, after he sold his business, had little to do other than go to the gym in the morning and speak with younger men.

They saw him as the Elder that he had become. He helped them recalibrate their thinking and focus on the important things. He was not a challenge but he was challenging. Through that, he found his place.

If an Elder is wise, s/he knows that they stick their nose into someone else’s business without being invited, it will get tweaked and perhaps even bloodied.

If they are invited, they know they may offend but they have been asked to offer their advice/counsel/opinion.

Finding your place at any stage of life is important. Each of Shakespeare’s stages suggests different places for a woman or man.

It is important to find yours to have the quality of life you want.

Are you interested in 1:1 coaching, please click here to see my schedule to book a free discovery call or schedule time for coaching.