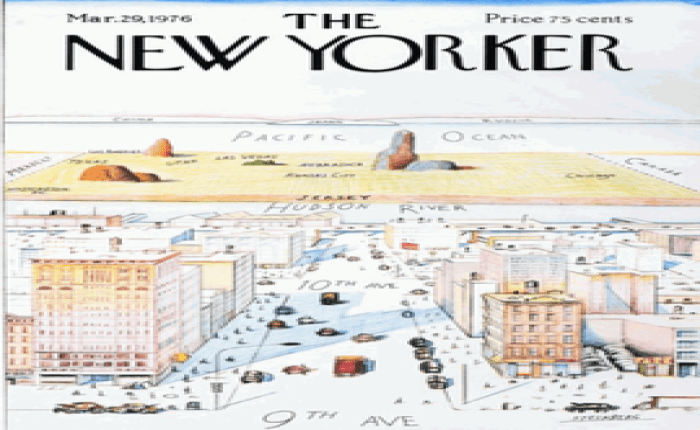 The cover of “The New Yorker” above is one of its most famous. It accurately depicts the provincial attitude of New Yorkers who see the world as only they can — New York is the center of the universe and everything else is a barren cultural and food wasteland. Let’s not even get into the politics!

Your view of the world may be from Chicago, Duluth, Los Angeles, Dallas, Toronto, London, a rural town in Pennsylvania… Wherever you see home. Conditioning has suggested to you that making a change is hard. As a result, too many mornings you wake up wondering, “Is this all there is?” You should consider that the 1st signal to pay attention to.

It Isn’t Just Where You Live

To be clear, I’m not simply talking about where you live. What affects people more is often their work. After all, we make decisions about how to spend our work life in our teens and prepare for and work in that career for half of a century. Do you think it’s possible we might be wrong? Judging by what I hear from people, the answer is often, “Yes.”

Using myself as an example, in the summer of 2008, I have the epiphany that I didn’t really like living on Long Island, New York. I had a career that centered on New York, a house and a young son. We sold our house at the top of the real estate market and moved to Northeastern Pennsylvania 2 hours from New York City. I was able to work remotely most of the time and start to break away from the hypnotic trance that New York City cast upon me.

We now live in Asheville, North Carolina, I work from home and network with recruiters worldwide. In another month, I make the next transition from headhunting to coaching where I can leverage my academic background, interests, experience and abilities in ways that I choose, not as an employer chooses.

As I coach people now, I listen to many stories of people who are disappointed by life and feel trapped by it. Maybe they are in the job that sucks or living in a mindless routine that leaves them feeling lonely. They are going through the motions, letting their employers decide too many things… What time to start work, what time to eat lunch, are you allowed to leave at a time where you get home before dark.

Have you ever considered that it can be different?

If not, you have not noticed that the world has changed a lot since you were little, started going to school and given the message to, “Shut up. Do what you’re told. Regurgitate a bunch of stuff we tell you is important. Or else!” You are just doing the adult version of that.

I’m not going to tell you the changes easy. It isn’t. You will have to work at it and make sacrifices. You may feel masterful what you do now and have to return to being a beginner again. These past few years as I’ve moved into coaching certainly woke me up!

A friend of mine spends half the year in a condo in Puerto Rico. “In case you don’t know this, cellphones work in Puerto Rico and we have fast internet.” Another does work from Columbia. No one ever knows or cares where they are when they do their work.

Technology is now available that can change your life in ways that were impossible to imagine not so long ago. Yes, some of you will feel like pioneers until you discover ex-pat communities abroad or in North Carolina (Very few people in Asheville are from Asheville; they all come here for the ease, the milder winters, lower housing costs, the mountains and tolerance of difference).

I’m coaching someone now who has been screwed over by one employer or another and has decided to start his own business. “I can do this for more than a year and, if it doesn’t work out, I can always go back to corporate.” Sometimes, he’s scared. What a surprise. Then he taps into the old memory that the current one is linked to and remembers that, just because it happened in the past, doesn’t mean it has to happen in his present or future. After all, we tend to worry about a lot of things that never happen.

But as someone else am working with said recently, “I have prostate cancer. I don’t know how much time I have left but I just want to laugh again.”

Has your laughter gone away, too?