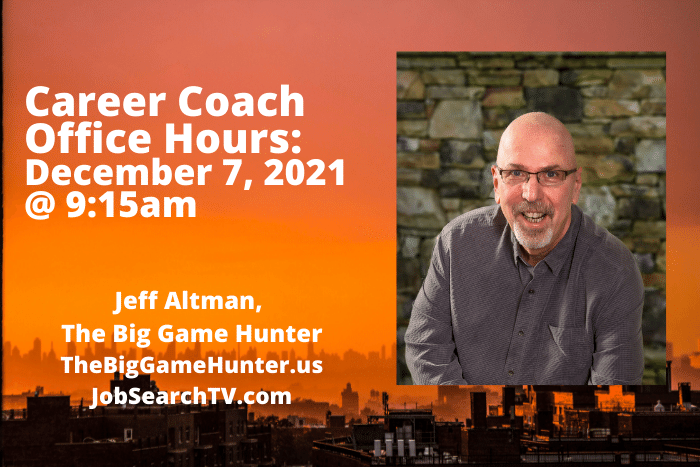 Facebook Share Twitter Share Google+ Share
If you have a question about your #jobsearch #hiringstaff #management #leadership #workplace issues or anything work for that matter, join me at 9 AM and put your question into chat. You can also email questions to TheBigGameHunter(at) gmail.com and put the phrase “Office Hours” into the subject line and I will answer it on my next show. #careercoachofficehours #careercoaching #careercoach #jobsearchtips #jobsearchadvice #interviews #hiring #managingpeople #leadershipskills

You may also find, “10 Signs You’re Wasting Your Time in Your Current Job ” helpful

How can recruiters trust job candidates’ resumes now that it has become common practice for some, but not all people to exaggerate their accomplishments?

What are some interesting questions asked in an interview?

Does it raise suspicion during a job interview if you ask what their policy on trading shifts is?

What are some of the best responses to “sell me this pen/pencil” in a job interview?

Can people legally look for a new job while on a leave of absence from another job?

How do you improve an employee’s commitment?

What do you look for when building a team?

Will having a Yahoo email damage your chances of employment?

What job interview questions are applicants often too nervous to ask that would actually be helpful to both them and the interviewer?

What is so bad about a career break that employers are wary of hiring somebody with one?

Is it rational to reject a candidate just because s/he has a gap on his/her resume?

What might be the reason for the job being reposted after the interview went well?

In chat, someone asked if a recruiter had ever scammed anyone. They then clarified that they were asked for the last 4 digits of their Social Security number.