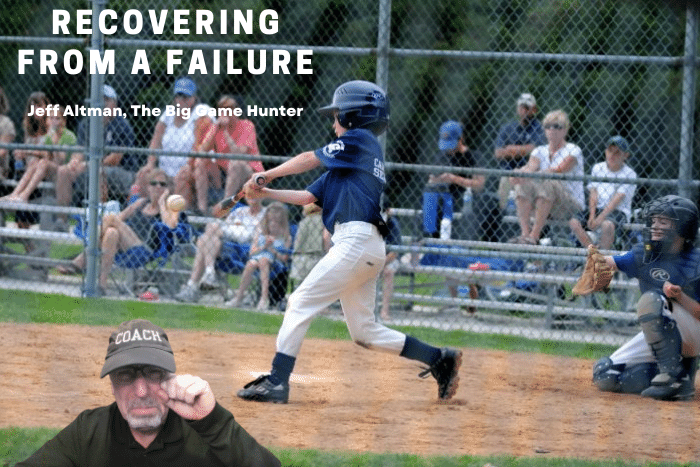 Recovering from a Failure | Career Angles

It was the bottom of the ninth of a tie game. Bases-loaded with two outs. A bunch of eight-year-olds were playing Little League baseball where Yankee Stadium now stands. I was behind the plate.

The pitcher set up and through what an eight-year-old considers a curveball. The right-handed batter swung and the ball dribbled out approximately 2 feet from the batter’s box. All I had to do was charge out from behind the plate, pick up the ball, and step on home plate.

But I froze. The winning run scored and remember seeing the look of disgust on the face of the adult manager at my failure. I carry that failure like a 2-ton sack of concrete on my back for a long time.

It haunted me at many critical times. I wasn’t clutch. I couldn’t come through when it was important. An eight-year-old remembers everything wrong that is ever done.

Every person fails at some point in their life and career. The question is how you recover from failure. It wasn’t important that I didn’t know that I could come out from behind the plate, grabbed the ball, and step on home. Although I didn’t understand that at the time, that was my manager’s fault, not mine.

Often, we put people into situations where we should not have expected them to be successful. As a leader, you need to be prepared to talk with your team about your expectations and how to fulfill them. That includes using best judgment at critical junctures

Even so, you need to help people bounce back from failure. For example, when people are laid off, often they take it is a personal failure as though it was their fault their firm was losing tens of billions of dollars and they were chosen amongst the other few hundred or a few thousand people for termination. It wasn’t but that’s the voice of the eight-year-old that lives in our heads.

We need to accept support and guidance from others to move ahead, even while we lick our wounds from our mistake. Few mistakes are so critical that we need to replay them as voices of doom for years to come as I did.

For me, it started with taking the first step. The next time, I got on the mound and pitched a one-hitter over seven innings, felt better about myself and began the process of moving forward.

For you, you may need to deconstruct what happened with someone else or with several people to see where the mistake occurred, if there was one.

“What could I have done differently?”

That last one isn’t useful, but for many people is there default option that they need to eliminate sooner rather than later.

Winners find the way to win. Talent isn’t enough to do that, although it is a starting place for many. One of the ways that winners find that way to win is that they learn from their past mistakes and outgrow them. They don’t make the same mistake twice.

A few weeks later, I caught a game where again it was bases-loaded and they batter punted the ball and I stepped on home plate and through the first for the second out to end the inning.