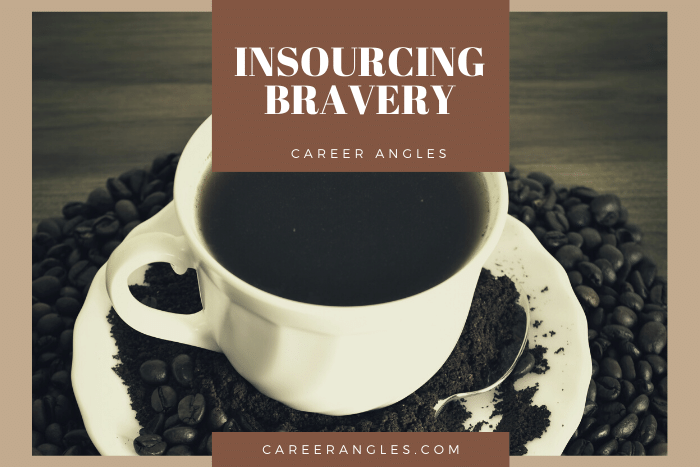 “the bravery witnessed here today will never be forgotten”

This article is not for men and women who put their lives at risk to protect their nations or communities. I have no right to question your bravery in this context. In my mind, only you do.

Over my lifetime, I have allowed myself to become numb. I watch tv. I eat too much. I work too hard.

I have good reasons for it but, over time, something happened to ME.

When I think of ME, I think of the passionate man who loved everything he chose to do, who attacked life with vigor and said, “No,” to unreasonable bosses.

I have sat at desks in employment agencies with a desk next to a desk, air conditioning that didn’t always work (or in the case of one firm, never worked), complaining and moaning rather than saying, “No,” to ill-treatment or verbal abuse. There were men who lied to my face and co-workers who insulted one another. I dished it out and I took it.

Many people I spoke to as a headhunter have experienced similar things. They have been told by management they have a “permanent position” only to be laid off and reminded that they worked in an “at-will” state where you could be fired for any reason.

Others have been promised raises and promotions that never appeared or were worse than originally promised and stayed for years after the betrayal.

Others are treated as afterthoughts — forgotten about and taken for granted.

They sit quietly at their desks or in the cabs of their trucks saying nothing. Their will, like mine, having been sapped by fear of change.

I know I took on my fear from my father who owned a small business in The Bronx. He worked for the owner of his company and then his son before buying the firm himself. He was a decent man who was fearful of many things. I took it on.

As a commissioned salesperson and the only working adult in my home, I would leave the office subconsciously pondering every deal I was working on, fearful, and micromanaging every contingency. One mismanaged move by either an employer or potential new hire and a $50000 fee I had spent months working on could blow up. I would be back to less than square one; after all, I lost all that work and time for naught.

I started micromanaging my son and soon apologized to him and explained what was going on for me.

When I would leave work, I would come home, have dinner, plop down in front of a tv and watch something; I have spent thousands of wasted hours in front of the tv listening to people argue opinions or save the day.

Welcome to my Orwellian 1984

What happened to me?

I became conditioned to accept (not tolerate) my condition and developed a hopeless quality that things would never be different.

I think part of what happened is that, with time in front of a tv and now online, I outsourced my courage to change things.

Is any of this true for you? If you recognize yourself in anything I’ve written so far, leave a comment below. Just write, “Me, too,” so I know I am not the only one.

A few weeks ago, I came to realize it was time to change and no longer be the keeper of other people’s nightmares (thank you, Brian B for that well-turned phrase).

The tv is off (well except for the Giants’ football games; I am unable to change everything at once) and I’ve begun to reclaim my anguish and suffering. No $500 dinners out at America’s great restaurants or long vacations can rescue me from the reality that for me to make a change, for me to regain the helm of my ship, I cannot outsource my courage to a hero on tv. I must do it or continue to die the death of a thousand cuts.

I won’t tell you what to do. I can only ask, “does any of this resonate for you (Again, comment, ‘me, too’ in the comments area)?”

If it does, it’s time to take action to change. You don’t have to do it by yourself; you can work with a coach to help you make small changes that become huge differences.

After all, a lifetime is not a long time. You may think of yourself as being immortal by life has a peculiar way of showing us how foolish you are.

Jeff Altman, The Big Game Hunter is a career and leadership coach who worked as a recruiter for more than 40 years. He is the host of “No BS Job Search Advice Radio,” the #1 podcast in iTunes for job search with more than 2100 episodes. He also hosts Job Search TV on YouTube, Amazon and Roku, as well as on BingeNetworks.tv for Apple TV and 90+