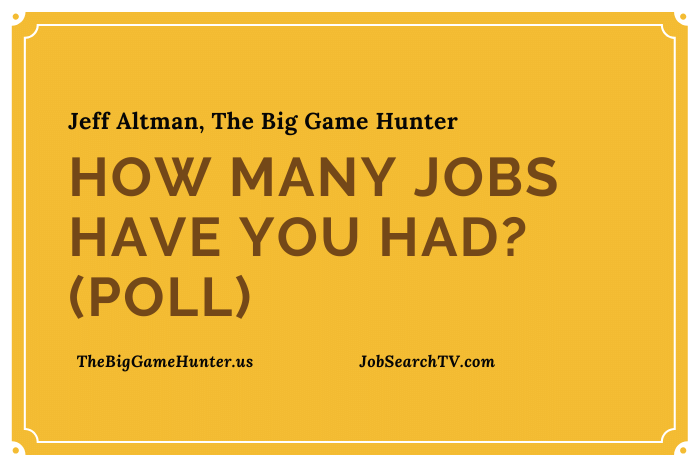 I am one of those crazy people who reads data at the US Bureau of Labor Statistics website. I read a very interesting statistic: people born between 1957 and 1964 have had 12.4 jobs throughout their careers.

Reading that prompted me to ask, “how many jobs have you had?”

As one person pointed out, it is more likely for someone older to have more jobs.

The research was not clear about that. So I assumed that government workers might think of changing jobs rather than including promotions. That’s the way I did find it for the poll.

One person pointed out that he had several jobs while in school and chose not to include them. But, of course, those skewers the numbers lower for him.

Another person commented that he had jobs in school and more while figuring out what he wanted to do with his career after he graduated from school.

A “Younger Millennial” (there are two cohorts of millennials– the originals who are the basis for all the mocking commentary, and the younger) pointed out that she started working when she was 15 and has had many jobs. Finally, at age 33, she laughed, saying, “I guess I’m an average Boomer!”

This poll was not scientifically validated.

It depends upon who my connections are and their backgrounds as well as who logs onto LinkedIn and was able to see the poll.

Search Advice Radio,” the #1 podcast in iTunes for job search with more than 2200 episodes. He also hosts Job Search TV on YouTube, Amazon and Roku, as well as on BingeNetworks.tv for Apple TV and 90+ smartsets.