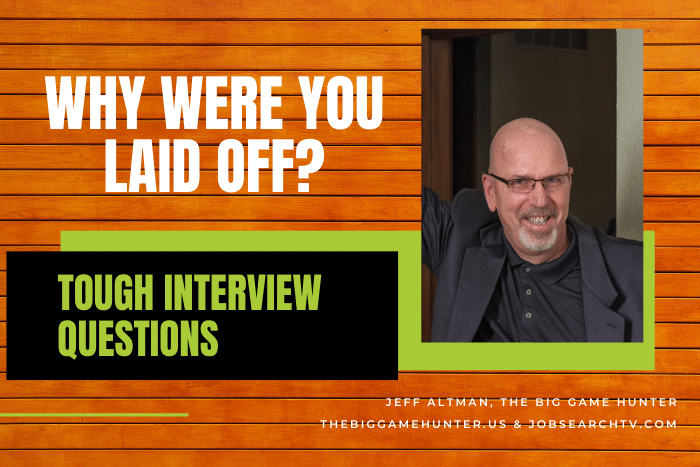 Tough question for people to answer because they have to basically talk about a painful episode in life. And I say that because being fired, being made redundant, being laid off, is embarrassing. In US culture, and many others, you know, we identify with work and when we're laid off, it's as though we were failure. It's not true. But emotionally, that's how we take.

So how you answer this is important, because it's signals whether you're a wounded animal, or you're someone on on the mend. So here's the way to frame it. Think in terms of, the firm had to make some cuts. I'm going to give you a framework answer, or an example answer in a moment. But the firm had to make some difficult choices. And you were among many people who were affected there.

So for example, my previous employer had to make a series of cuts and as a result, my position was eliminated. While I was there, and I've got to tell you, I was very proud of the work that I did in my role as (fill in the blank),

For example . . . and then you talk about some of the things that you accomplished in little role that make you different than all the other people who are going to be complaining about being laid off. You're not going to be complaining. Notice what we're doing. We're switching from an immediate statement that your position was eliminated to a success that you had. And then, since then, you've used your time, or I've used my time, not working to think about some of my choices to get some additional training to keep up to look at what you want to do in your career.

Thus, here's part four, this role caught my eye, because it's an opportunity that fits my background and the direction I want to take my career going forward. Not a complicated answer, but it's one that allows you to acknowledge the layoff, get that out of the way, and then move on to your successes, which are more important from your vantage point in marketing yourself. And then from there, go into how you've used your time and how this job really suits you.

Hope you found this helpful. I'm Jeff Altman. My website is TheBigGameHunter.us. Go to the site; go exploring, there's a lot there to help you. In addition, if you're interested in a one on one coaching, you can schedule time for a free discovery call or schedule time for coaching. Also, if you have an interview scheduled, I can coach you for that.

You can also do mock interviews at the TheBigGameHunter.us/mock-- very inexpensive and I review the videos that you record so that you can practice online 24x7, and from there, I can help you tweak those answers and make them even more effective. Lastly, connect with me on LinkedIn at linkedin.com/in/TheBigGameHhunter. Hope you have a terrific day and be great!

Tough Interview Questions: Why Were You Laid Off? | JobSearchTV.com