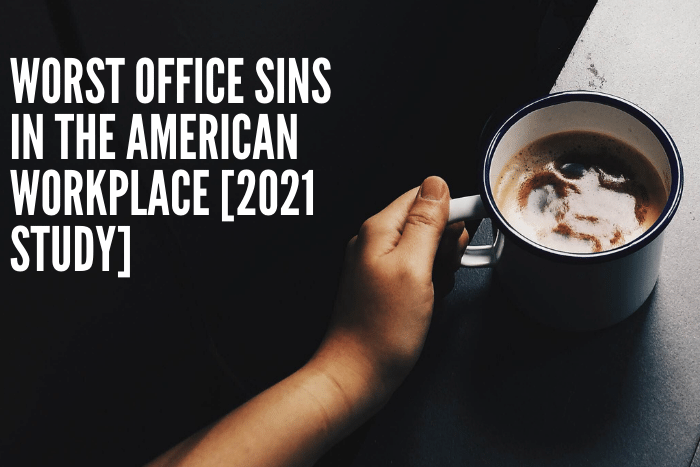 What’s the worst act you’ve committed or seen at work? We ask 1,000+ Americans and the results are shocking. 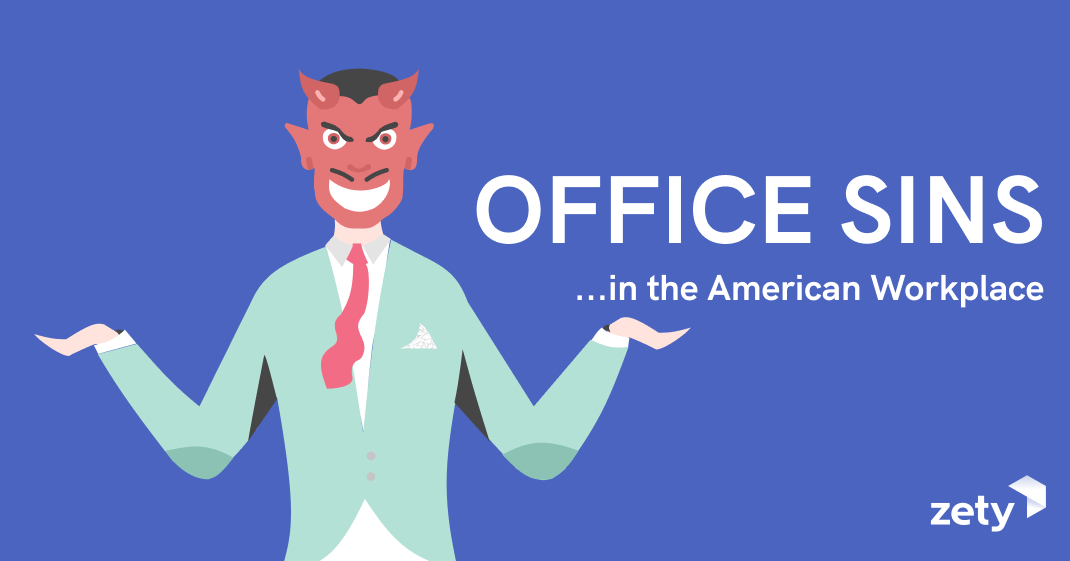 We’ve all committed some minor sins at work—

Sure, you’ve taken the occasional set of staples (or two), but just how far have your fellow co-workers gone in committing sinful acts in the workplace?

We went to the source—1,000+ Americans were surveyed to figure out what the most common office sins they’ve seen or committed in the workplace.

Here’s what we found.

Haughty eyes, a lying tongue, a heart that devises wicked schemes—you get the picture.

Biblical imagery aside, most Americans do commit some sinful acts in the workplace. Most aren’t so egregious, but you’ll think twice about leaving your belongings out after reading our results. Let’s break down some key results based on these 7 deadly sins.

When desires strike, people meet them—even if it’s in the workplace.

When asked if respondents ever had sex at the office, 15% of people confessed to doing it at least once. Men (18%) are more likely to have had sex in the office than women (13%), and Gen X confessed to it more often than other generations.

The same gender gap applies when asking respondents if they have ever masturbated at work. Out of the 17% of people who did confess to doing it at least once, 30% were men, a whopping 20% more than women.

Just how do such desires spring up during work hours? Maybe they’ve sent out some racy selfies. When asked if they have ever taken racy photos at work, 18% of people confessed to doing it at least once.

Oh, the insatiable need to have it all—food, money, status, power. Surely, it’s not all that bad in the workplace, right?

And here’s the kicker—when assessing the open-ended responses (i.e. worst thing you’ve ever seen someone do at work), this sin really stood out. What was the most outlandish cold-blooded answer?

“One of my coworkers staged a fake robbery and locked two employees in a walk-in freezer and stole the safe from the office.”

When others get what you want, what happens? Envy boils in your blood.

But surely, no one ever made a story about their co-worker to get them fired, right? Well, 7 percent of people have confessed to this sin. Who’s the culprit oftentimes? The new guy: 20% of people who have 1-2 years of experience confessed to doing it at least once.

One sin that many people commit is looking through the emails, conversations, or personal files of co-workers. Over 30% have confessed to it, with Millennials having the highest rate (31%) of all age groups.

How far can an envious rage go in the workplace? Let’s say an undeserving co-worker gets a raise or your boss puts extra work on you. What happens next?

Well, some literally get into a fist-fight. 16% of people confessed to having a physical altercation at work at least one time. Men (22%) are more likely to confess to this sin than women (13%). And if you’re in Software/IT, then 1 out of every 5 co-workers get into such altercations!

The most wrathful acts came in our open-ended responses:

“I once erased someone’s emails as an act of revenge.”

“I was a crew trainer at McDonald’s and I saw a co-worker spit in a cop’s breakfast burger. They looked like they were in a hurry, so I said nothing and handed it out the window…”

“I spiked my manager’s tea with liquid THC”.

Don’t tell me what to do. I can do whatever I want, just watch me, no one will know.

Sound like a co-worker you know? Maybe not, but ask yourself: has your lunch even gone missing? Personal items not where you left them? Well, it’s pride run amuck, and it’s prevalent in many of our respondents.

The same gender and age trend for most sins continues for pride as well—men do these acts 10% more than women, and Millennials (37%) have done these acts more so than all other age groups.

The most common office sin falls in this category as well—looking over the shoulders of your co-workers without them knowing it. A whopping 82% of co-workers confessed to this, so keep this in mind next time you’re browsing the internet at work.

Why eat a co-worker’s lunch? Sure, it’s possible you forgot yours, but what if you were to find out that it was just the person’s gluttonous nature? 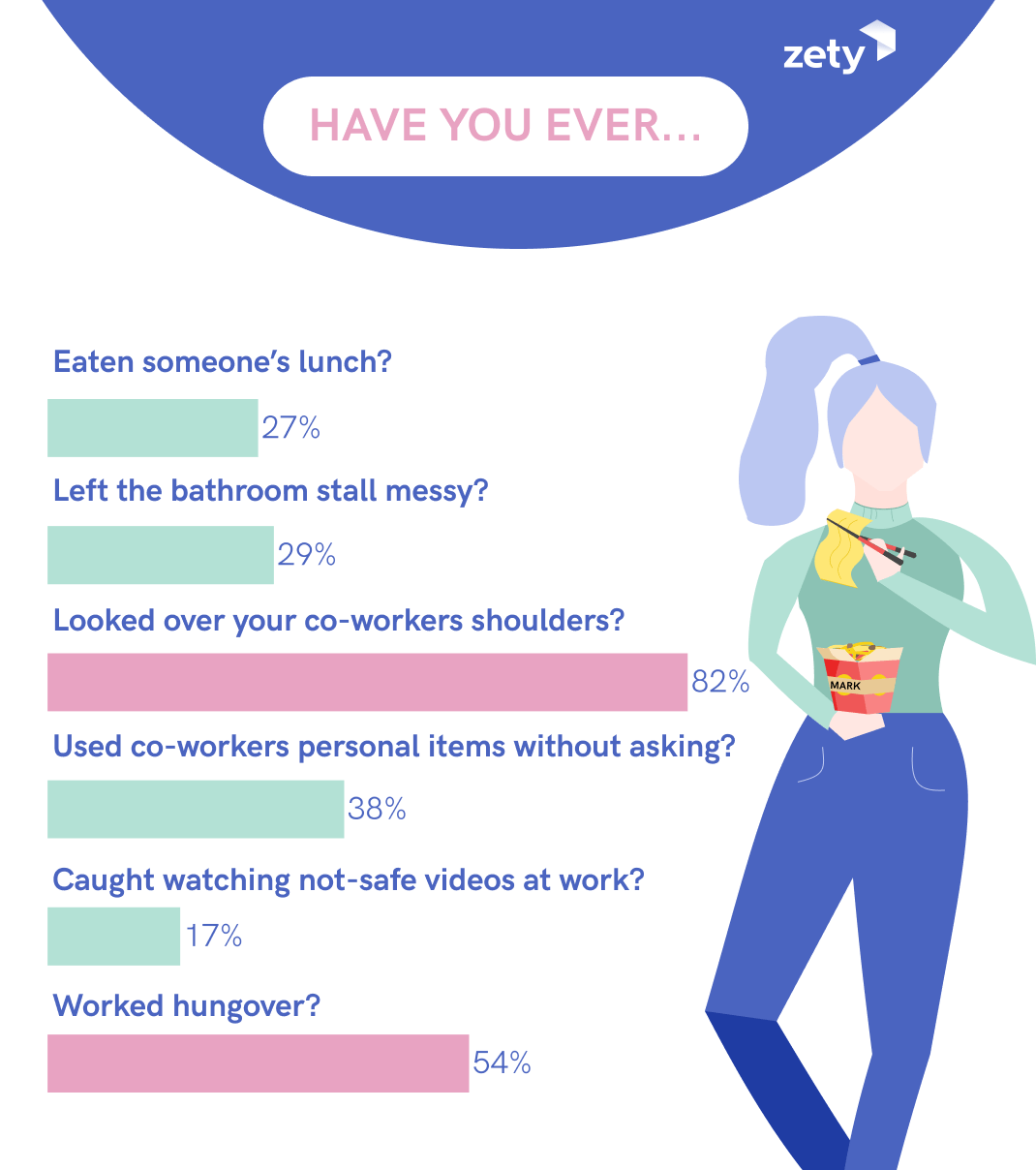 Well—hate to say it, but most Americans are gluttonous. When asked if people have ever seen a co-worker drunk at work, nearly half (48%) said they did. And the number is even higher (51%) for those who came into work hungover.

The real gluttonous move? You’ve gotten drunk at work. 17% of respondents confessed to it at least once, with men (10%) doing so more often than women. There are many open-ended responses who list drinking as the main sin at work.

Finishing off the list of deadly sins—laziness. How did this play out in the workplace? 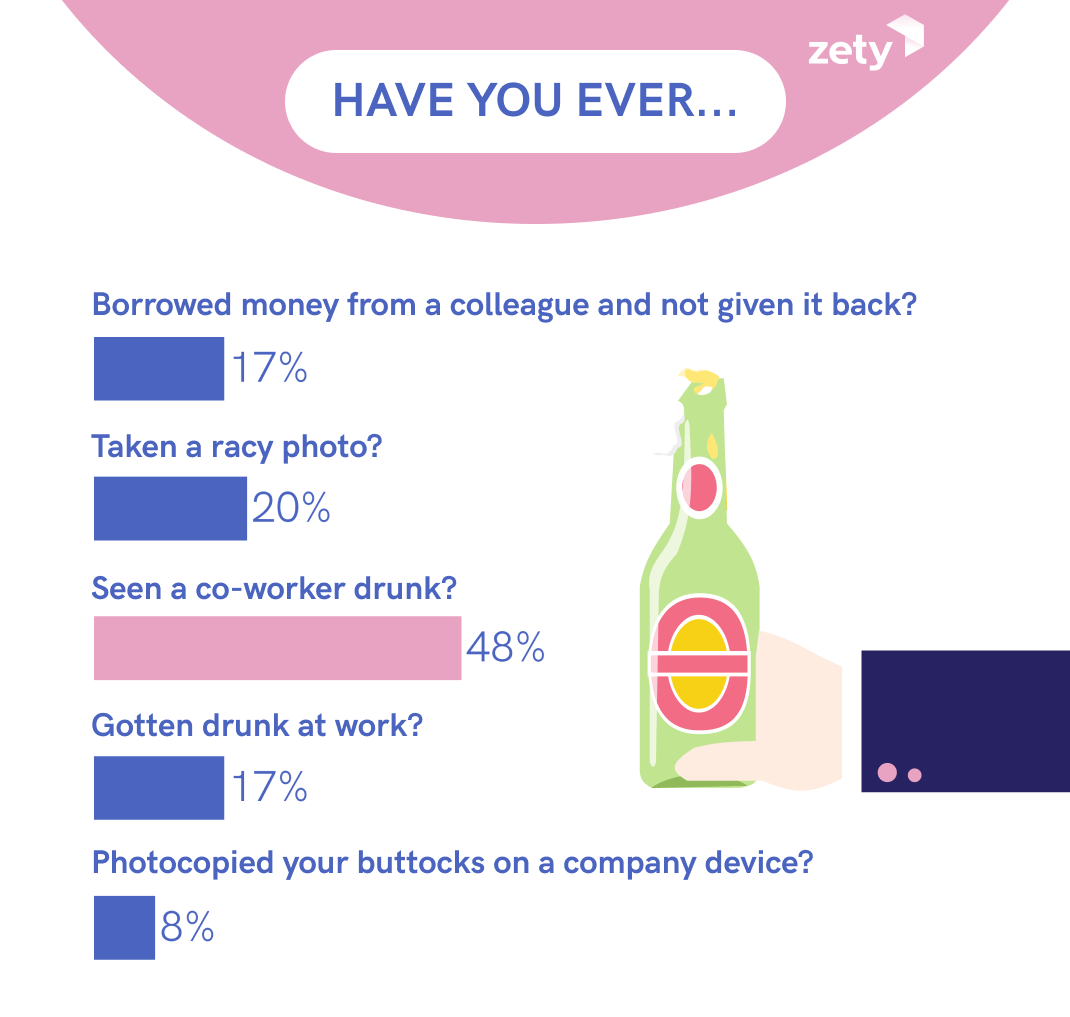 However, when looking at many of the open-ended questions, you get a better picture of what it means to be a sloth in the workplace: longer breaks, not working, showing up late, sleeping on the job—to name a few.

One respondent went as far as “coming to work to clock in, leave for 8 hours, come back and clock out—not a soul noticed”.

Jeff Altman, The Big Game Hunter is a coach who worked as a recruiter for what seems like one hundred years. His work involves career coaching, all as well as executive job search coaching, job coaching, and interview coaching. He is the host of “No BS Job Search Advice Radio,” the #1 podcast in iTunes for job search with more than 12000 episodes.