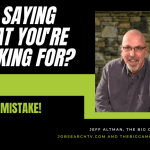 EP 1926 Salary negotiation is a touchy subject for job hunters. One area of conflict is whether to tell people what you are looking for.

Here, I’m going to talk with you about one of the mistakes within job hunters make. It's the classic one of not being willing to state their price or state their salary in the interview. Some firms are not going to interview you when you don't state how much your currently earning. And, if you do state it, you know, there's always that trepidation that people have about “whoever quotes the price first,” or “whoever mentions a number first loses.”

I want to give you some counter arguments to that. Harvard did a study some years ago where they interviewed lawyers . . . You know, people who are considered negotiators for a living. In it, they asked them, how do you enter into a negotiation? Now, 80% of the lawyers basically said, “I size the other person up and, you know, within a few minutes and if I can sense if they want to do an elaborate negotiation or collaborate or if they would do a hardball negotiation. No one can be tougher than me in the negotiation.” That was 80% of the lawyers.

What does this tell us? Basically, it tells us that 80% of lawyers are reactive. They don't go out aggressively. They are always responding to the other person. Now, move this to a job search where the hiring firm is reactive and you are reactive… It’s like a giant case of Alfonse and Gaston.

It’s no wonder that there is a degree of adversarial relationship that builds up over the course of money because neither side is particularly open about it. You are each reacting to the other.

Here’s what I want to suggest. Another part of the study talks about how those who frame the negotiation tend to get what they want or damn close to it. So, by setting the marker (and this assumes that you know what your value is for what you do). After all, if you want to change careers and am currently a hot dog vendor in Manhattan, New York, and what I want to do is make that $250,000 as a trader, okay, you have no qualifications to do this and, thus, it's pie-in-the-sky. If you have reasonable expectations of what your value is by researching online at any number of places, you can look job ads to see what the salaries are that recruiters are quoting (since employers tend not to quote numbers. Recruiters do), look at look at ads to get an idea of what your potential value is.

That doesn’t mean that is what your value is. There may be people with more discrete experience in a particular area than you . . . I think you nowhere I’m going . . . But, assuming you are in the sweet spot for your market area, you have an idea what the value is for what you do and thus. What their valuation is.

So, don't be reluctant to state your claim for what your value is, assuming is not insane like the hot vendor who wants to trade. That person is not going to get to 250 right out the door unless they are the most incredible hotdog vendors and they been trading while selling hotdogs… That is a different scenario.

But don't be afraid to state you price because what you're doing is setting the marker for value and, yes, it's really possible they might go a little bit higher but you can always change the number later as you learn more.

Now, If they try to negotiate you with you at the beginning, they may say, “well, that’s a little bit more than what we are willing. Are you willing to be a little flexible?”

“For now I can be. However, as I learn more. I may decide that it's not appropriate to be flexible. So, I'll simply say, I will agree for now, but let's revisit that subject later on if you're prepared to hire me, okay?” Thus, what you're able to do is demonstrate the flexibility that they’re looking for. They may say, “No. You have to be flexible now. We will never go a dollar more.” Generally, that's HR lose talking and saying that kind of stuff because their job is to drive you to your lowest number. A hiring manager’s job is to bring on great people to make them look good and to deliver what it is that they are supposed to be delivering to people.

So, with HR, you say whatever you need to. Just get to the hiring manager. Make them fall in love. Yet, if and when the subject of the money comes up, you can say that he or she, “HR wanted to confirm that I would be willing to be flexible about dollars. I told him I make this and that I am looking for that. They asked for flexibility. What do you think? Do you think I really need to be flexible here because what I'm see is my value in the marketplace is such and such and it doesn't make sense for me to take less than that. AND this job is really interesting. Could you do better than what they're talking about?”

Do you get what I'm saying here?

So, I think it's a good approach to take to help you get past the gatekeeper and get on to the real decision-maker and do the negotiation with them.