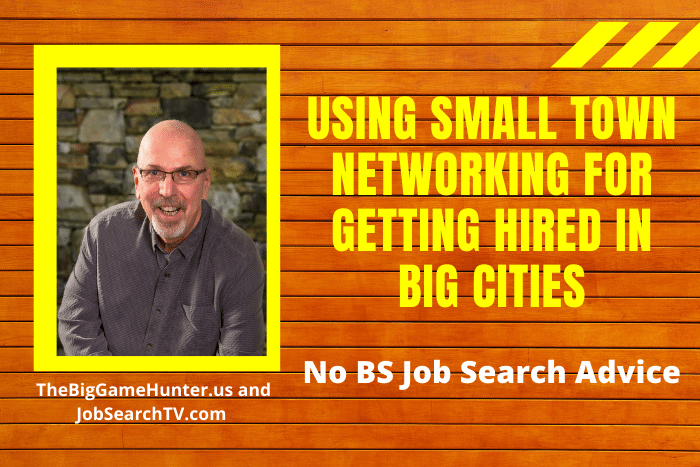 Using Small Town Networking For Getting Hired In Big Cities

You may also enjoy, “Networking When You Are Inexperienced”

Living in New York City as I did for so many years, everyone tended to live an anonymous life. Former Beatle John Lennon lived anonymously here with no one bothering him when he was on the street walking somewhere. I remember seeing George Harrison standing on the open door of his Rolls-Royce, looking for someone. No one approached him. Generally, celebrities can live anonymous lives in New York City.

When my wife and I moved to Long Island, we started to spend less time in Manhattan. We began to spend more time with other parents, particularly adoptive parents (we adopted our son from Kazakhstan) and found great relationships with other adoptive parents.

Eventually, we moved to a small town in northeastern Pennsylvania that was six blocks by six blocks with one traffic light. The town’s population was a few thousand, stretching beyond the immediate village to a few miles outside. We developed great relationships in this small town before deciding to move to Asheville, North Carolina. But, again, we need to build new relationships with people just as we had before.

What did we do, and how can you apply it to job hunting (or trying to hire, for that matter)? What have others done to network into new roles? Why should you even try to network? It’s so uncomfortable!

Unlike celebrities, you don’t want to live an anonymous life professionally. You want to have people know about you, like you, trust you and respect you, not just for your work before who you are. No one will refer someone they don’t trust or like. You want people to feel comfortable knowing you and be willing to recommend you to others.

In addition, networking works best for job hunters. Many years ago, I interviewed Dave Opton, the CEO and founder of Execunet, an organization committed to helping senior professionals network and find work. Dave told me that networking filled 70% of all positions. Of those, 70% of the 70% (or 49%) were filled as a result of introductions to people their network knew who were unknown to the job hunter.

Why should you network? Because it works!

As for how to network, there are many different ways to do it.

One of my favorite stories involves an out-of-work banker who was on the phone talking with the recruiter when his cleaning person walked by and overhearing him, ask for a copy of his resume. He avoided giving it to her for several visits before his wife approached him and told him to give it to her. As it turns out, their cleaning person was the wife of the bank president. She cleaned homes to remain humble. He got his next job through them. In his,

“So talk to everyone and follow up on every lead. You never know where the introduction may come from that results in you being hired.”

Small towns have under-the-radar power players. These are the people who everyone knows. They can be auto mechanics, bookkeepers, or people known to everyone because they are a “legacy” in the town. In Charlotte, NC, one such power player was a local barber who trimmed the hair of senior bankers in town. The way you network with these people was to visit with him a few times and wait for him to ask you, “So what do you do?” That was a signal that he liked you. He provided many introductions that resulted in many people being hired. You know people who are connectors because they serve others or invest in firms that need help.

If you have a child in school, the school can be a great gateway to meeting other people. We met other parents through our son and his school. The school ran get-togethers for families but, I know, that may not happen in big cities. Your son or daughter may have playdates or other opportunities to meet children. Children have a parent or parents who you can get to know. They know people, too. Build a relationship in advance of when you might need it just by being the parent and having your son and daughter play with other children.

Neighbors are an underutilized resource. When we lived in Pennsylvania, a neighbor of ours and I were talking and walking. While we were, he mentioned to me that his firm in town was having trouble finding people and did I think I could help. I went on to fill three positions with them in engineering, even though they thought they were well connected in town.

When I lived in New York, I was able to do the same thing with my neighbors, who all knew what I did (although I never pushed it on them) but knew that they could come to me if they needed help. Being friendly to your neighbors as you wait for the elevator, the train or bus, or in the store can help you land that next role.

Don’t ignore business networking groups. The local Chamber of Commerce in my town in North Carolina provides excellent services to small businesses while also supporting large companies move into town. In addition, there are business networking groups lie BNI where owners meet to refer business opportunities to one another. These groups exist worldwide and afford you a chance to meet with small to midsize business owners, as well as local power players who can provide introductions.

In BNI, one of the ways to become known is to make yourself available to substitute for someone unable to attend. The chapter will allow you to speak and tell everyone about yourself toward the end of the meeting. Be friendly and not a wallflower when allowed to introduce yourself and network. Like with the Chamber of Commerce, these are business owners who are known within the community. People know people, and if they like you and trust you, they may introduce you to others.

John Sampson, a networking expert, once said that the first step toward being an effective networker is to “get out of the house.” In the United States and other parts of the world, we can do that again and implement many of these networking techniques in person. Where restrictions still exist, these can all be done virtually.

You will not be successful if you don’t engage with people. Most people will be friendly and willing to help if only you ask for support.

Don’t let pride interfere with what you know you need to do. The worst thing that can happen is that you try, and nothing improves. If you don’t try, things will remain the same. Nothing improves.

Take a chance on being neighborly. What do you have to lose?

You May Also Like My Interview with Michelle Tillis-Lederman, The Connector’s Advantage

Jeff Altman, The Big Game Hunter is a coach who worked as a recruiter for what seems like one hundred years. His work involves career coaching, as well as executive job search coaching, job coaching, and interview coaching. He is the host of “No BS Job Search Advice Radio,” the #1 podcast in iTunes for job search with over 2400 episodes.

Are you interested in 1:1 coaching, interview coaching, advice about networking more effectively, how to negotiate your offer or leadership coaching? People hire me to provide No BS career advice whether that is about a job search, hiring better, leadership, management or support with a workplace issue. Schedule a discovery call at my website, www.TheBigGameHunter.us

My courses are available on my website, www.TheBigGameHunter.us/courses The courses include ones about Informational Interviews, Interviewing, final interview preparation, salary negotiation mistakes to avoid, the top 10 questions to prepare for on any job interview, and starting a new job.

I do a livestream on LinkedIn, YouTube (on the JobSearchTV.com account) and on Facebook (on the Jeff Altman, The Big Game Hunter page) Tuesdays and Fridays at 1 PM Eastern. You can send your questions about job search, hiring better, management, leadership or to get advice about a workplace issue to me via messaging on LinkedIn or in chat during the approximately 30 minute show.