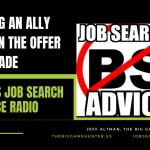 EP 2239 Jeff Altman, The Big Game Hunter discusses an effective strategy to implement when you receive your job offer.

Let's talk today about a simple job negotiation strategy that should be obvious to you but for a lot of people, it isn't. Let's get to work.

You are in the middle of a negotiation. Maybe HR has extended the offer. Maybe the hiring manager has. Let's work at the assumption that HR extended it.

HR tends to be fairly rigid and rules oriented. For example, one client of mine says, "We have the authority to increase salaries by a certain percentage as long as the person is within the same job level." Using that as an example, let's say you are an accountant. You are going to remain an accountant''s; do not being hired to be a controller. You're going to get you the same kind of accounting work for their organization as you did for your current one. What they will do is increase your salary by fixed percent.

Let's say that salary is too low for you. What do you do? HR doesn't necessarily have the clout to instantly up the offer. Your strategy is to get to an ally in this which is usually the hiring manager. You say to them, "I would really like to join. I think it's a great opportunity. I would love to work with you but HR extended a job offer to me that's just a little bit too low."

"What would be more acceptable," he or she will respond.

You will give them a number a little bit higher. They will say, "Let me see what I can do." Often, it is in the hiring manager's interest to increase the offer because, being practical about it, if they have to go back and interview all over again to find another 1st choice, they're wasting a lot of time,, thus, money in order to get someone to accept an offer and fill a job.

Here, you're looking for an ally from the hiring manager and they may say, "look, my hands are tied. I can't do it." At this point, you have a choice but you have learned something about the amount of clout. This individual has within the firm. After all, if they don't have the ability to increase at a job offer by a few thousand dollars,, that HR is so controlling of the budget that they can get you on board tells you something.

Again, I'm not going to tell you what to do here but you have learned something about the firm and you want to take that into account when you consider the job offer.

Now, let's do it the other way around. The hiring manager has lowballed the job offer. Let's now look at HR as the ally and say to them, "I really want to join. He or she seems like such a great manager. The work would be terrific. The offer is just a little bit low. Could you increase the offer (or have the offer increased)…" And then you offer an alternative salary. They may say yes or no. They may talk about their benefits and how good they are. All and all,, you are learning something, but the strategy here is to go for the ally
.
Go for the person who hasn't extended the offer to be an advocate for you for increasing the money.