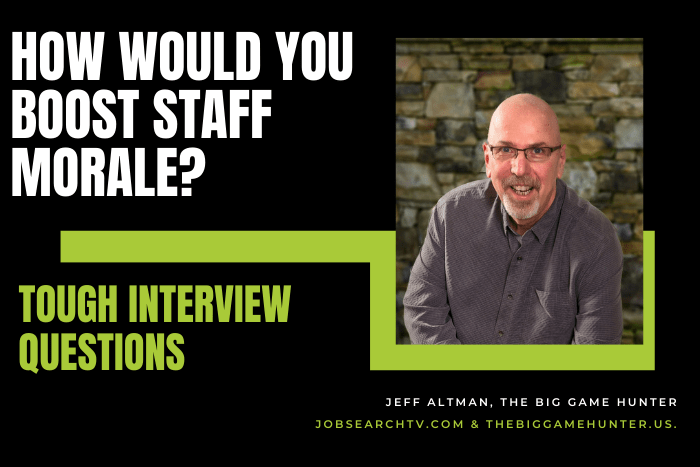 Fascinating question, because they’re signaling to you that they’re having a problem with staff morale. So, I think the honest answer, and this is the way you would start by saying, “You know, I don’t know the team so it’s hard to know what’s going to work for them. As a result, I can give you some examples from the past. But, you know, you have to be flexible with these kinds of things, to know what’s going to work and what isn’t going to work with a particular organization, and particular cultural issues.” So, that’s the law point to the question.

Then, from there, you start to throw out a couple of examples. So, for example, “one thing I’ve done in the past is, I’ve rewarded people and acknowledged the heck out of people who’ve stepped up for things, because . . . you know how it is in many firms.  People want to make sure that the artillery is going over their heads, so they keep their heads down when they have an opportunity to step up. And the issue for them is, people who volunteered have also been killed off because they weren’t always successful. So I want to praise the heck out of the people who volunteer.

“And if they’re not successful, I don’t want to punish them, I want them to know that I’ll turn it into a learning moment for them so that they don’t feel rebuked or punished. I want to make sure that they’re supported. I also want to encourage change, so that if there are things we’re not doing well, I want to make sure that that the team feels comfortable coming to me. I also want to make the place have a little bit more fun because what starts to happen in many organizations is, you know, there’s a certain drudgery that starts to occur, and people start to feel as though it’s humdrum.

“So, where I can introduce some fun and some play into the work environment, without getting away from the obvious goal toward accomplishing certain things, this is what I’d like to do.

“So, for example, in one organization,  I created a degree of competition, where, we’ve divided the group up into teams, and we kind of gamified things. So, this team was competing against this team and we want to see who the winner was. I also have been involved with training people, I’ve done spot bonuses for people. I’ve encouraged volunteering.

“But I also have to say, I’ve also been very direct with people. So, when they screw up, other than in the volunteering situations when they make mistakes that I know they could do better, I bring it to their attention publicly. But, you know, I sit down and talk with them about what their thought process was like, and how they came to the miss, treated it as a training moment. I also like to have more regular feedback with the team . . . and they for me, so that, in this way, we’re not waiting for the annual review for me to suddenly go, ‘aha, let me tell you what you’ve been doing wrong for the last year?’ No, I want there to be a flow of information.

“So, understand, there’s no one way to do this. And I don’t know the organization well enough to know which of these approaches would work. I just know that they’ve worked in the past, I might try some of these, depending upon what I see and sense and the kind of feedback I get from the teams to move on for. “

So, they’re kind of giving you a nice sugar-coated picture. And, number one is, once you’re on board, you’re going to have to get acclimated to the new environment, the people you’re supporting, people who you report to get a sense of the engagements, as well as the team. You’re going to have a lot on your plate.

Jeff Altman, The Big Game Hunter is a coach who worked as a recruiter for what seems like one hundred years. His work involves career coaching, all as well as executive job search coaching, job coaching, and interview coaching. He is the host of “No BS Job Search Advice Radio,” the #1 podcast in iTunes for job search with more than 1800 episodes, and is a member of The Forbes Coaches Council.