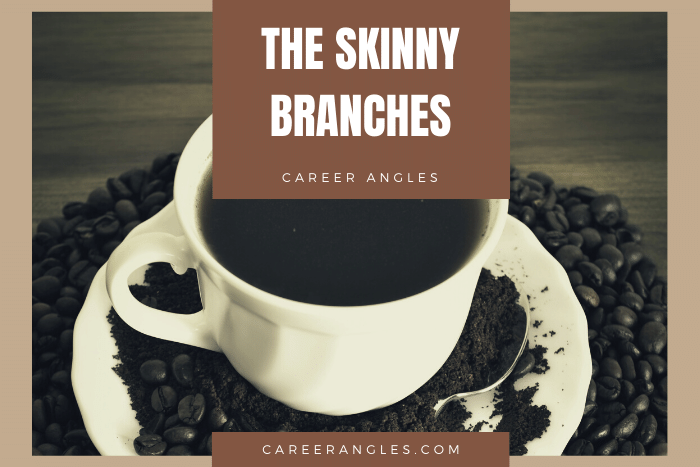 At least some parents do.

These parents want the best for their children and are afraid that they will be hurt somehow.

At least, that’s how I interpret it.

I never climbed a tree.

I’m not sure I could, but my mom was always worried that I might fall and hurt myself.

The problem is that many of us (and I include myself in this) never learned how to climb out on “the skinny branches” of trees.

The skinny branches are the place where your weight on those branches might cause you to fall/fail.

We learned that taking a risk might cause us to fail and get hurt, personally and professionally.

I think back to the risk I took when I met my wife. I have been married twice already and had been divorced twice. My second wife died from her addictions a few weeks after the divorce became final.

I was damaged goods and very fearful. Although I dated, I always expected to be alone and sad.

Professionally, I was impetuous, starting one business or another that was doomed to failure.

I didn’t know how to take calculated risks. I took impetuous ones.

When I met my third wife, we were older students in grad school.

We would go out on a date, and I would not hear from her again. This happened twice, separated by a year.

And when she called out of the blue a few years later and left a message, I called back. When she didn’t return my call, I called again. As you would expect, she did return that call, and I left a message in her voicemail that teased her.

I took a chance that changed my life.

I did that when we moved to Pennsylvania from the New York area. I was as New York City as it comes but also knew that New York at stop being fun for me a while ago.

And then I left the firm I was associated with for many years. I took another risk.

I then took another risk of training for a career change and then making that change.

I learned how to make fewer “all in” chances and gradually climbed out on skinny branches that could hold my weight even though I’m not 24 anymore, and at an age, many have already retired by.

I’m looking at something new and adding it to my repertoire.

You can’t stay in the safety of proximity to the tree trunk all the time.

You have to climb out further.

I won’t risk everything.

Something is exciting about the newness . . And something scary, too.