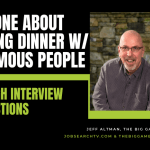 EP 1944 If you could have dinner with any famous person, living or dead, which three would you choose and why?

If You Could Have Dinner with 3 Famous People, Living or Dead, Who Would You Have Dinner With and Why?

"The why" is the big part of this with one exception. The exception is if you select a politician. With few exceptions, politicians, at least in the United States, open the door to risk that you may not fully understand. We live in very charged times and you might pick a politician that your interviewer would find ghastly. We can't control those responses. All we know is if you say something about a political situation, you risk antagonizing half the people you come into contact with. If you don't care about that, well, go ahead and say what you want to say and be prepared for consequences. Not everyone has the openness to separate their own political biases and evaluate objectively. That's what I’ve seen time and time again.

So, if I were to rephrase the question, I would ask, “Who inspires you?” Who's special in your life? Which famous individual represents something for you that's extraordinary?

Now, if you work in fashion and there's a particular individual in the fashion industry who is a big personality, you speak about their sense of style. You speak about their willingness to take a risk. If you're working in business and you want to point to Warren Buffett, Mark Zuckerberg, a Bill Gates-- Warren Buffett-- smart reliable. Mark Zuckerberg—willing to take chances at a young age and build from there. Bill Gates. You can pick the business side of him and how he built Microsoft to a certain level and then step further and say, "and then he went on to champion healthcare around the world with his nonprofit."

There are lots of different ways that you can approach this but, ultimately, it's about who inspires you? What inspires you about what they do and, using that as your lever in answering the question.

One extra thing. Sometimes you're interviewing at an organization where
that person who inspires you is the president or chairman. You point to that
individual and when they think or say, "huh, are you trying to suck up to us," or investigate fully. If this is the circumstance, you want to add, "I just want to be clear. I'm not trying to suck up here but . . . " and then you go into your explanation of what it is about this leader that inspires you.